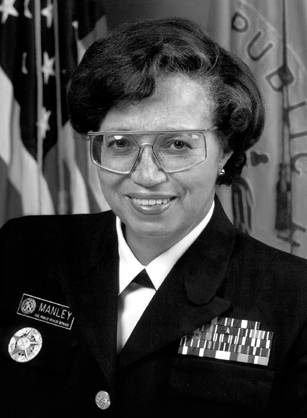 Audrey Forbes Manley, who would eventually be acting Surgeon General of the United States, was born in Jackson, Mississippi on March 25, 1934 to Ora Lee Buckhalter Forbes and Jesse Lee Forbes. In 1955, Forbes earned a bachelor’s degree in biology from Spelman College in Atlanta, Georgia and then enrolled in Meharry Medical College in Nashville, Tennessee. She graduated from medical school in 1959 and completed her residency in 1963 at Cook County Children’s Hospital in Chicago, Illinois in 1963. During her residency, Forbes taught pediatrics at Cook County School of Nursing. Additionally, while at this hospital, she became the chief resident physician for the hospital’s pediatrics department, making her the first woman, second African American, and youngest person to hold this position at age 27. She earned her last degree in 1987 from Johns Hopkins University, in Baltimore, Maryland, with a master’s in public health.

Forbes transitioned to a job at North Lawndale Neighborhood Health Center in 1965.  In 1967, she became the assistant medical director at Woodlawn Child Health Center. She then moved to Mt. Zion Medical Center in San Francisco, California, but continued to work in pediatrics. In 1966 she was elected to Spelman College’s board of trustees and served until 1970.

In 1970, Audrey Forbes married Dr. Albert Manley, who was the president of Spelman College. As the “first lady” at Spelman College, she held many influential roles, including serving as the chair for the university’s Health Center Advisory Committee. Audrey Manley established Spelman’s Health Career Office; she also organized and became a consultant for the Initiative for College Personnel in Family Planning and the Family Planning Program. In addition, she was the medical director for Emory University’s Family Planning Clinic at Grady Memorial Hospital in Atlanta.

Manley used this experience in education and the medical field to transfer into her work in government and policy as she took a job with the U.S. Public Health department. Her first role was a commissioned officer ranking as a captain in 1976. Within this position, she studied sickle cell disease.  Continuing her education, she earned a master’s of public health from Johns Hopkins University in 1987.

In 1987, Manley became the Principal Deputy Assistant Secretary for Health in the Commissioned Corps of the U.S. Public Health Service and the first African American woman to hold this job. Then, Manley achieved the rank of Rear Admiral in 1988 with the position of Assistant Surgeon General during President Ronald Reagan’s administration. In 1994, she was promoted in 1994  Deputy U.S. Surgeon General. During the Clinton administration she served as acting U.S. Surgeon General, between 1995 and 1997, after Joycelyn Elders’ resignation.  When Albert Manley died in 1997, she left Washington, D.C. and returned to Georgia to become Spelman College’s eighth president. She was the first graduate of the college to lead the institution and served until her retirement in 2002.

Manley has held faculty positions at various universities throughout her career, including the University of Chicago, University of California, and University of Illinois. She is a member of the American Academy of Family Physicians, the National Merit Scholarship Committee, and served as the U.S. Delegation to UNICEF and UNICEF/WHO Joint Committee on Health Policy from 1990 to 1993. Manley has received of honors from a number of organizations. Spelman college presented her with an honorary doctor of laws in 1991. She received the Young Women’s Christian Association’s Academy of Women Achievers Award in 1999 and the Atlanta City Council’s Distinguished Service Award in 2002.