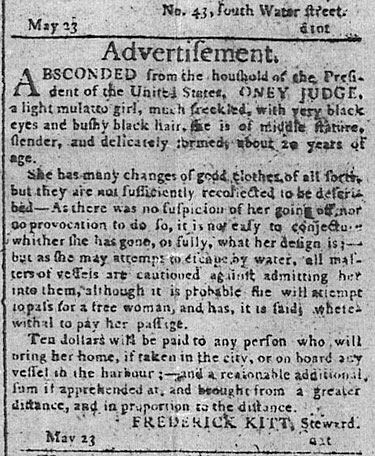 Advertisement for the capture of Oney Judge, in a Philadelphia newspaper, May 23, 1796
Public domain image

As a former slave in George Washington’s household, Ona “Oney” Judge is best remembered for her escape to New Hampshire. Born at Mount Vernon, the Washingtons’ Virginia plantation, around 1773 (exact date not known) to an indentured servant named Andrew Judge and a slave name Betty, Ona “Oney” Judge was raised as a slave and began serving as the personal attendant to Martha Washington at the age of 10.

When George Washington was elected President, the family followed him to New York (the nation’s capital at the time), and then onto Philadelphia, Pennsylvania when the capitol was relocated. While in Philadelphia, Oney Judge experienced a much broader freedom than most enslaved people. She could walk the town on her own, running errands or exploring in her free time, and was even given money by the Washingtons for entertainment purposes. While out in town, she encountered a large community of free African Americans thanks in larger part to Pennsylvania’s Gradual Abolition Act.  This act proved a hardship for the President as it stated that any slaves that had been brought into the state and had lived there for six consecutive months would automatically become free citizens.  To skirt this law, Washington had his slaves return to Mount Vernon under the guise of visiting family just short of every six months. This rotation denied Judge her freedom.

After learning of Martha Washington’s plans to give her to Elizabeth Custis (Martha’s granddaughter), Judge was determined to flee since Martha’s plan prevented Judge from being declared free upon their deaths. On May 21, 1796, under the ruse of preparing for yet another trip to Mount Vernon, Judge packed her things and walked out while the family was eating dinner. Judge then boarded a ship called the Nancy headed for Portsmouth, New Hampshire. During her time in Portsmouth, Judge taught herself to read and write, and embraced Christianity.

Elizabeth Langdon, a family friend of the Washingtons, spotted Judge in Portsmouth and reported her location. George Washington sent his men to retrieve his property, bypassing the Fugitive Slave Act’s law requiring him to provide proof of ownership in front of a court prior to chasing her. Judge promised to return to the Washington household if they would guarantee her that she would be free upon their deaths. With the Washingtons unwilling to promise this, Judge stayed in New Hampshire.

George Washington refused to accept this response and requested the aid of Martha’s nephew who was visiting Portsmouth. The nephew, Burwell Bassett, Jr., was given instructions to obtain Judge by force. Bassett first approached Judge, who had since married and had a child, to request she return. When she denied his request, he told the Langdons that he intended to kidnap both Judge and her daughter. Realizing the insanity of this plan, the Langdons warned Judge of her fate.

Fleeing to Greenland, New Hampshire with her family, Judge remained there until her death. Upon the death of George and Martha Washington, her ownership, along with that of her children, transferred to the Custis estate forcing Judge to live the lived the rest of her life as a fugitive slave. During an interview with the Granite Freeman, an abolitionist newspaper, when asked if she regretted leaving the comfort of the Washington estate for her near-poverty conditions, she responded with, “No, I am free, and have, I trust, been made a child of God by the means”.

Oney Judge married John Staines on January 8, 1797. Together they had three children: Nancy, Eliza, and Will. She passed away at the age of 75, on February 25, 1848, in Greenland, New Hampshire.