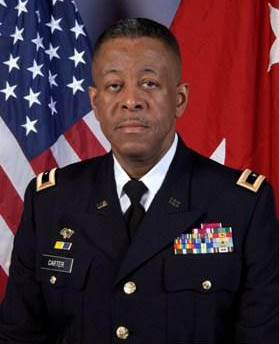 Joseph C. Carter was an accomplished individual with a blemished past. Carter enlisted in the National Guard and served with them in reserves from 1974 to 2012. In 1978 Carter joined the Boston, Massachusetts Police Department (BPD) where he served as a patrol officer, detective, patrol supervisor, Deputy Superintendent, Chief of Staff of the department, and Chief Administrative Hearing Officer, and finally in 1988 he took the Chief of Police position in Oak Bluffs, Massachusetts, his hometown. While serving for the BPD, Carter also helped train new enlistees in the National Guard. He was a Platoon Leader, Officer, and Company Commander.

While at the BPD and the National Guard, Carter earned a BS in Organizational Behavior and Management from Lesley College in 1988 and an MS in Criminal Justice Studies from Atlanta University in 1989. He also earned a MS in Strategic Studies from the United States ArmyWar College in Carlisle, Pennsylvania.

In 2007 Carter who had most recently been with the Massachusetts Bay Transportation Authority Police, and as of March 2006 promoted to Brigadier General, was appointed the state’s Adjutant General by then-Massachusetts governor, Deval Patrick. He became the first African-American TAG (Adjutant General) in the 370-year history of the state’s Guard. During his service at this position he earned a state (not federal) promotion to Brigadier General.

After four years of service, allegations surfaced in 2010 against Carter saying that in training in 1984 he sexually assaulted a female officer. As the incident was investigated Carter was put on administrative leave where he continued to earn his $173,000-a-year salary. This investigation was initiated when Carter wanted to be promoted to Major General on a federal level.  Here his promotion must be approved by the Army and confirmed by the U.S. Senate. During the investigation Carter stated that the charges were part of a smear campaign against him because of his efforts to change a law that made firing certain state military division employees impossible without a court martial. Others in the Guard were displeased he changed the Massachusetts National Guard’s work week from four ten hour shifts to five eight-hour shifts.

On September 19, 2012, Carter retired from his position with the Massachusetts National Guard amidst the rumors that Army investigators found probable cause these allegations were relatively true. Carter continues to deny the allegations and claims that he resigned in order to not distract the National Guard from fulfilling its mission.

Since retirement, Carter moved back to Oak Bluffs, Massachusetts his wife Rae, an Oak Bluffs school teacher, and his daughter, Emily.