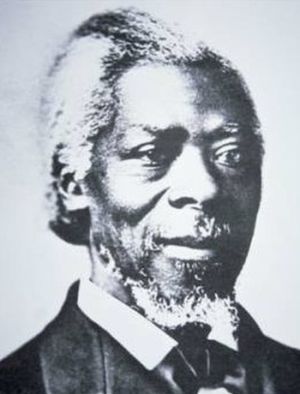 Abolitionist and civil rights activist William Lambert was born in Trenton, New Jersey in 1817, the son of a manumitted father and a freeborn mother. As a young man Lambert was educated by abolitionist Quakers.

Twenty-three year old Lambert arrived in Detroit, Michigan in 1840 as a cabin boy on a steamboat, and eventually started a profitable tailoring and dry cleaning business.  Upon his death Lambert left behind an estate estimated at $100,000.  Lambert was also a founder of the St. Matthew’s Episcopal Church and served as one of its wardens.

In Detroit Lambert soon became active in the movement to secure suffrage for the black men of Michigan. He founded the Colored Vigilant Committee, Detroit’s first civil rights organization. In 1843 Lambert helped to organize the first State Convention of Colored Citizens in Michigan. He was subsequently elected chair of the convention and gave an address regarding the right to vote that was directed not only towards black people, but also to the white male citizens of the state. Lambert also worked to bring public education to the black children of Detroit.

Lambert was a friend of radical abolitionist John Brown and, like the more militant abolitionist leader Henry Highland Garnet, Lambert called for the slaves to rise up against their masters. At times Lambert very publicly helped fugitive slaves escape to Windsor, Canada, which was just across the Detroit River from the city of Detroit. Lambert’s most famous incident occurred in 1847, when he had the owner of fugitive slave Robert Cromwell thrown in jail so that Cromwell could escape to Canada by boat.

Much of Lambert’s abolitionist work, however, was done behind closed doors. Unlike the abolitionist movements which emerged in other Northern states, African Americans were excluded from Detroit’s Antislavery Society. Lambert later claimed to be the creator and president of the secret organization, African American Mysteries: Order of the Men of Oppression. In 1885, two decades after the end of slavery, he shared his story with the Detroit Tribune, and produced documents, including lists of transported slaves and correspondence with John Brown, Lucretia Mott, Wendell Phillips, and William Lloyd Garrison.

The Order kept few physical records, and outside of Lambert’s and several other accounts, most of the evidence of its existence comes in the form of rumor and cryptic asides in the journals of white abolitionists. The Order was nearly exclusively African American in composition. Only a few white men rose past its lowest degrees. Lambert created three degrees, including an initiation modeled after a slave’s punishment. The Order had secret words, grips, rites, and solemnities, all of which were designed to prevent the uninitiated from receiving the higher knowledge that came with ascension, i.e., practical information pertaining to the business of their efforts to help black men and women escape out of the United States. Lambert claimed that, in its heyday, the Men of Oppression transported 1,600 slaves to their freedom per year, moving people through their network of homes and barns from the Ohio River to Lake Erie in ten days. While that number is an exaggeration, there is little doubt that this secret organization helped fugitive slaves flee to Canada.