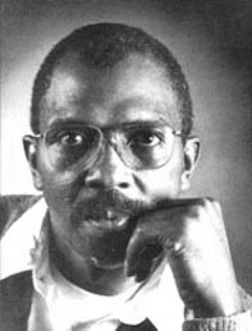 Etheridge Knight took a very unconventional path on his way to becoming one of the most popular poets during the Black Arts Movement.  America’s first introduction to Knight’s literary skills came with his first book publication, Poems from Prison in 1968.  Mr. Knight’s troubled past and time in prison led to an unorthodox style of “street” language, drug culture vocabulary, and black slang that immediately separated him from other poets of the era.

Knight was born on April 19, 1931 in Corinth, Mississippi.  His childhood was spent in Paducah, Kentucky where he was raised with his six siblings.  Knight left school at the age of fourteen turning to a street life that included pool halls and bars until he was seventeen.  At that time he forged his parent’s signature to enlist in the United States Army only to be kicked out for being too young.  He rejoined the army at the age of eighteen, serving as a medical technician in Korea from 1947-1951 until being discharged after a shrapnel wound.  During his time in Korea, Knight became addicted to drugs and would continue his habit on his return.  To fund his drug addiction he turned to a life of crime until he was convicted of armed robbery in 1960 in Indianapolis, Indiana.

Knight spent eight years at the Indiana State Prison in Michigan City. While in prison, Knight drew on his life experiences to create his own unique style talking about his past experiences with drugs, sex, and violence.  In 1963 Knight began to write poetry in prison.  Two years later his first poem, “To Dinah Washington,” was published in Negro Digest.  Etheridge Knight’s breakthrough came on his publication of Poems from Prison in 1968.

Knight was released in 1968 and later become the writer-in-residence at the University of Pittsburgh in Pennsylvania (1968-1969), Hartford University in Connecticut (1969-1970), and Lincoln University in Missouri (1972).  His career also included numerous magazine articles and even time as poetry editor for Motive in 1972.  Despite continuing his drug addiction after prison, Knight was able to publish many more books and poems including A Poem for Brother Man (1972), Belly Song and Other Poems (1973), and his most critically acclaimed piece Born of a Woman: New and Selected Poems (1980).  Knight received awards from the National Endowment for the Arts and the Guggenheim Foundation.  Etheridge Knight died from lung cancer in 1991 in March 10, 1991 in Indianapolis, Indiana.