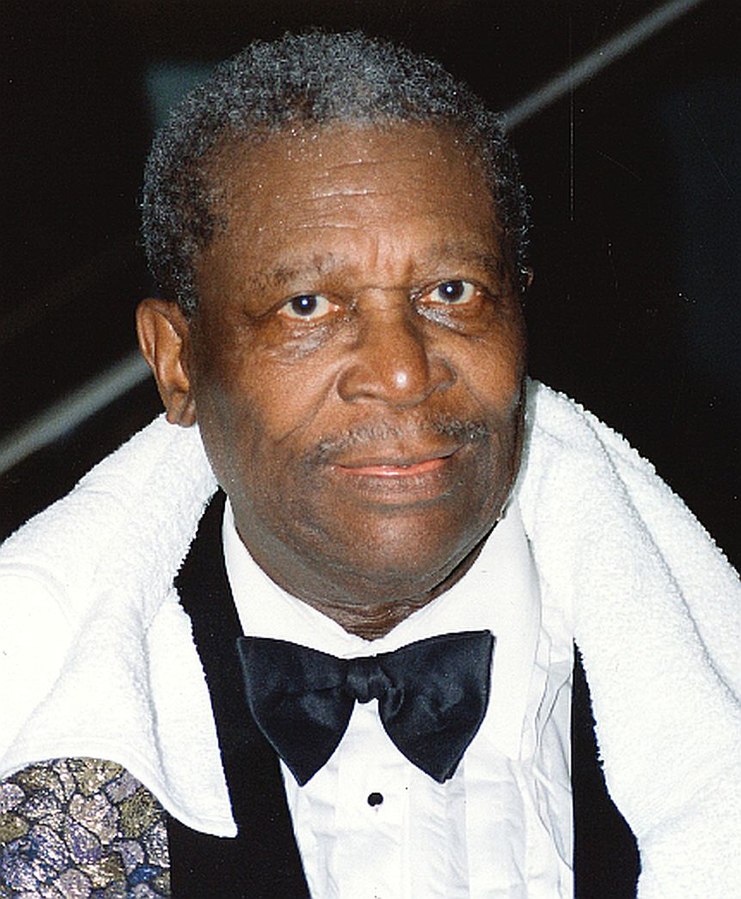 Hear a soundtrack specially chosen to enhance your learning about B.B. King (1925 -2015)

Legendary blues singer B.B. King was born Riley B. King on September 16, 1925, in Itta Bena, Mississippi.  King spent his childhood in the Mississippi Delta but left to pursue a music career in Memphis, Tennessee in 1946. While in Memphis, King was employed as a singer and disc jockey at radio station WDIA where he was given the radio name “Beale Street Blues Boy,” which he shortened to B.B.  In 1949 while still at WDIA, he recorded many of his early singles for RPM records in Los Angeles, California.

King began to have significant success as a blues artist in the 1950s with a string of recordings such as “Please Love Me,” “Whole Lotta Love,” “Every Day I Have the Blues,” and “Ten Long Years.”  This brought him to the attention of Paramount Records which signed the blues performer in 1962.  In November 1964 he recorded Live at the Regal at the Regal Theater in Chicago, Illinois, at that point one of the most successful blues albums ever produced.

Despite King’s exposure on a leading record label and his live album, his first national hit did not come until 1969 when he released “The Thrill Is Gone,” which rose on the blues, rhythm and blues, and pop charts.  That same year, King became The Rolling Stones’ opening act, a development that exposed him to a much wider audience.

King’s success continued into the 1970s with hits like “I Like to Live the Love” and “To Know You is to Love You.”  King’s career peaked in that decade although he continued to tour into the 21st century, sometimes performing more than 300 shows per year.  In 1988, King reached a new audience when he recorded “When Love Comes to Town” with the Irish band U2.

Although his music was never overwhelmingly successful commercially, King was recognized by the recording industry as an important influence.  Over the course of his career he garnered fourteen Grammys, including a Lifetime Achievement Award in 1987.  That same year he was inducted into the Rock & Roll Hall of Fame. King received honorary doctorates in music from Brown and Yale University, and the University of Mississippi, where King donated thousands of recordings from his personal collection, named him Honorary Professor of Southern Studies in 2004.  In June 2006 King participated in the groundbreaking ceremony for the B.B. King Museum and Delta Interpretive Center, which opened in 2008 in Indianola, Mississippi. On December 15, 2006, President George W. Bush awarded King the Presidential Medal of Freedom.

Beginning in 2001 King became a spokesperson for diabetes awareness. He had suffered from from Type II diabetes since the 1980s.