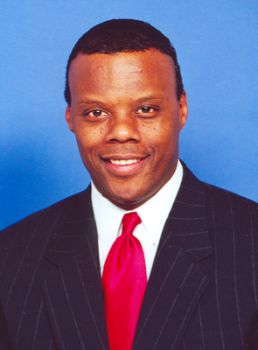 Image courtesy Office of the Clerk, U.S. House of Representatives

Former Congressman Julius Caesar (J.C.) Watts, Jr., was the first black Republican to be elected to a political office in Oklahoma. He was born in Eufaula, Oklahoma, on November 18, 1957.  A superior athlete, he starred as quarterback on a University of Oklahoma football team known for rarely passing the ball.  Consequently, after Watts graduated in 1981, the National Football League showed little interest in him.  Watts played professionally in the Canadian Football League for six years as a member of the Toronto (Ontario) Argonauts and the Ottawa Rough Riders.

After his athletic career ended, Watts entered politics.  Recruited by powerful Republican leaders in Oklahoma, Watts became a candidate for one of three seats on the Oklahoma Corporation Commission (OCC), a body that regulates utilities and the oil and gas industry. As soon as Watts took office, however, critics began to charge him with accepting campaign contributions and favors from the owners of the businesses that the OCC was supposed to regulate.

After serving four years on the state regulatory body, Watts in 1994 ran for the United States House of Representatives in Oklahoma’s Fourth Congressional District which included part of Oklahoma City and the town of Norman, the home the University of Oklahoma.  Watts won that election and was reelected three times, serving in Congress from 1995 to 2003.  In 2002, Oklahoma’s membership in the House of Representatives shrank from six to five.  Watts’s seat and that of another Republican representative were essentially merged, and GOP leaders prevailed upon Watts not to run for a fifth term.  He retired from politics and established “J. C. Watts Companies,” a business consulting and lobbying firm in Washington, D.C.

During most of the years J. C. Watts was in Congress, he was the only African American Republican in the House of Representatives.  He was also one of the few African American House members from a district that did not include a majority of black voters.  Watts was a darling of the conservative Republicans who controlled the House during his tenure in Congress.  They chose him to be the “Chairman of the Republican Conference” during the last four years he was in office; this position made Watts fourth-ranked among the House Republican leadership.  Watts refused to join the Congressional Black Caucus, an all-Democratic body often at odds with his political philosophy and the legislation he sponsored or supported.