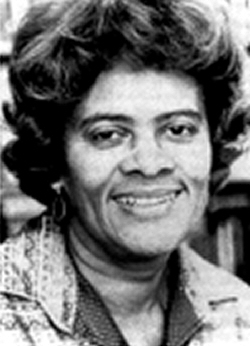 Evelyn Boyd was born in Washington, D.C. on May 1st, 1929, the second daughter of William and Julia Boyd. Though she was raised by a single working class mother and attended segregated schools, Boyd became the second black woman in the United States to earn a Ph.D. in mathematics. She credits the quality and dedication of the teachers at Dunbar High School who nurtured her interest in mathematics and science and prepared her for advanced study. Boyd graduated as valedictorian and, with the help of her aunt and a scholarship, she enrolled in Smith College in Massachusetts in 1941.

After she graduated from Yale, and completed a year as a post-doctoral research assistant, Boyd was hired at Fisk University in Tennessee as an associate professor. She stayed at Fisk for two years before launching a career in government and private industry. Between 1952 and 1967 she worked for the National Standards Bureau, IBM, NASA, the North American Aviation Company, and finally at IBM again. In 1967, after a divorce, she retired from industry to take a job as a professor at California State University, Los Angeles (CSULA).

In 1970 Boyd married Edward V. Granville, and in 1984 she retired from CSULA so that the two could move to Tyler, Texas.  There, she was offered a job at Texas College where she taught until 1988. In 1990 Granville was appointed to the Sam A. Lindsey Chair of the Mathematics Department at the University of Texas, Tyler. Granville taught there between 1991 and 1997 before she retired.