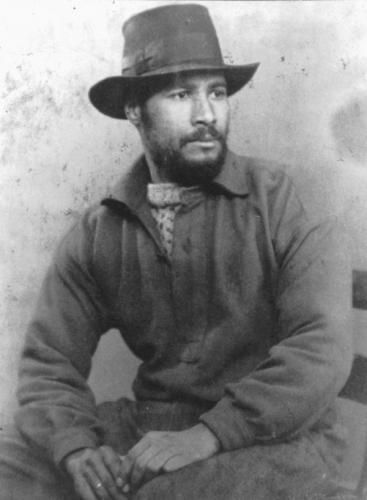 William Henry Johnson was an African American expressionist painter.  He was born on March 18, 1901 in Florence, South Carolina to mother Alice Smoot Johnson (known as “Mom Alice” or “Aunt Alice”) and father Henry Johnson.  William H. Johnson was the oldest of five children: Lacy, Lucy, James, and Lillian. Johnson spent his childhood helping out his family, finding a joy for painting, and attending rural grade schools in Florence.

At age 17 Johnson moved to New York where he worked as a cook, hotel porter, and stevedore.  In September 1921 he enrolled at the School of the National Academy of Design (NAD). Between 1923 and 1926 during the academic year he studied with Charles W. Hawthorne at the NAD and during the summers at The Cape Cod School of Art in Provincetown, Massachusetts.

In 1926 Johnson moved to Paris, France to study art.  He worked as a custodian to earn extra money.  Over the next few years he traveled and held exhibits in France, Germany, Luxembourg, and Belgium.  In 1930 Johnson married Danish textile artist Holcha Krake.  Johnson and his wife lived and worked in countries throughout Europe and in 1932, the couple arrived in Tunisia where Johnson hoped to connect to his African heritage. After a three-month stay they returned to Denmark via France.  During the next couple of years the Johnsons visited Norway and Sweden where they continued to exhibit their art.

After sensing danger from the approaching war in Europe, in 1938 the Johnsons arrived in New York.  William H. Johnson taught painting for a short period of time at the Harlem Community Art Center.  The Metropolitan Museum of Art included his work of black soldiers in its 1942 exhibit Artists for Victory.  In 1943 Johnson’s wife Holcha was diagnosed with breast cancer and died the following year.  From 1944 to 1946 Johnson worked as laborer in the Navy Yards in New York.  He went to Denmark in 1946 with all of his and Holcha’s possessions and for a few months he stayed with the Krake family. After the police picked him up for vagrancy and he was diagnosed with syphilis-induced paresis he was sent back to New York and was admitted to Central Islip State Hospital in 1947 where he spent the rest of the life.

New York lawyer Sol Romaner became Johnson’s guardian in 1948.  Romaner arranged for Johnson’s works to be taken from storage and in 1955, Johnson’s artwork was transferred to the Harmon Foundation which in turn donated Johnson’s works to relatives, friends, museums, and foundations.  Johnson’s paintings are in the collections of numerous museums, including the National Museum of American Art, a branch of the Smithsonian Institution.  William H. Johnson died on April 13, 1970 of acute pancreatitis.