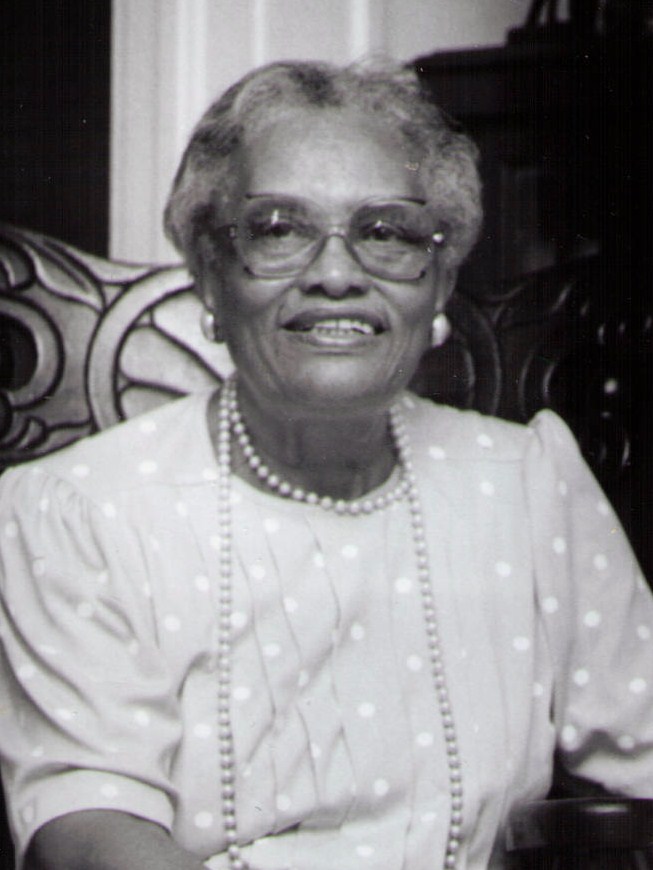 Born Dovey Mae Johnson on April 17, 1914, in Charlotte, North Carolina, Dovey Johnson Roundtree was an African American civil rights activist, attorney, and ordained minister who won the 1955 Interstate Commerce Commission case on segregated bus terminals. She was the second oldest of four children born to James Elliot Johnson, a printer who worked in the local offices of the African Methodist Episcopal Zion Church, and Lela Bryant Johnson, a domestic and seamstress.

Johnson attended Spelman College from 1934 to 1938 and then briefly taught school in South Carolina before moving to Washington, D.C., to seek employment in the burgeoning World War II defense industry. Because of her college education, however, Mary McLeod Bethune selected her to be among the forty African American women who became the first to train as officers in the newly formed Women’s Army Auxiliary Corps.

Following World War II and a nine-month assignment with the Fair Employment Practices Committee (FEPC), Johnson rekindled a romance with William Roundtree that had started at Spelman College. They married on Christmas Eve 1946, but the marriage lasted less than a year.

In 1947, Dovey May Johnson Roundtree entered Howard Law School, where Thurgood Marshall was one of her instructors, and graduated in 1950. As an attorney, her most prominent case came in 1955. Sarah Keys v. The Carolina Coach Company involved Sarah Louise Keys, an African American WAC private who had been forced by a North Carolina bus driver to relinquish her seat to a white Marine. The case was personal to Roundtree because she had a similar experience in 1943.

Roundtree and her law partner Julius Winfield Robertson took the complaint to the Interstate Commerce Commission (ICC) which on November 7, 1955, ruled that segregated interstate bus travel was banned, an explicit repudiation of the “separate but equal” doctrine in transportation that evolved from the 1896 Plessy v. Ferguson Supreme Court decision.

The ICC decision was hailed as a major breakthrough for the civil rights movement. Nonetheless, the ruling remained unenforced from 1955 to 1961, when U.S. Attorney General Robert F. Kennedy used it to support the Freedom Riders’ campaign that had prompted federal intervention. On May 29, 1961, the Justice Department requested the enforcement of the ruling in the states where the Freedom Riders traveled and essentially put a permanent end to segregation in travel across state lines.

Roundtree was also involved in a major—but less publicized—criminal case in which she successfully defended a black laborer, Ray Crump, Jr., who was accused of the 1964 murder of Mary Pinchot Meyer, the wife of a Central Intelligence Agency (CIA) operative and alleged mistress of the late President John Kennedy. In July 1965, Roundtree took the case and argued that Crump, given his limited mental capacity and small size, was incapable of carrying out the murder of Meyer. The not guilty verdict for Crump ironically opened speculation of CIA involvement in Meyer’s murder.

Roundtree, who in 1961 became one of the first women to be ordained as a minister in the African Methodist Episcopal Church, also integrated the previously all-white Women’s Bar Association of the District of Columbia Women the following year. She was a well-known public figure for youth advocacy in the District of Columbia and continued in this role after she retired from active legal practice in 1996.

Dovey Johnson Roundtree passed away on Monday, May 21, 2018, in her hometown of Charlotte, North Carolina. She was 104 years old.