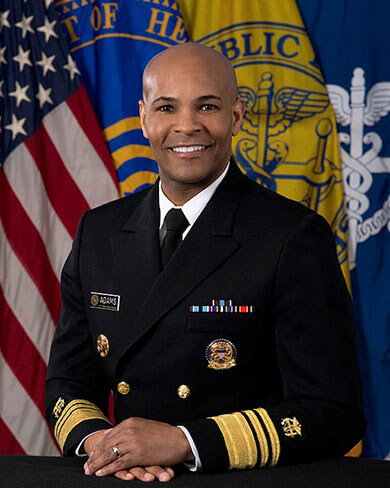 Dr. Jerome M. Adams, M.D., M.P.H. is the 20th appointed United States Surgeon General. With his appointment on September 5, 2017, he became the first anesthesiologist to hold the position of surgeon general.

Adams was born on September 22, 1974, in St. Mary’s County, Maryland.  He grew up on the family farm in Mechanicsville, Maryland where his parents, Richard and Edrena Adams, were teachers. He graduated in the top 5 percent in his class at Chopticon High School in St. Mary’s County.

Shortly after getting his medical degree, Adams began serving as assistant professor of clinical anesthesia at the Indiana University Medical College while also working as a staff anesthesiologist at Eskenazi Health, both located in Indianapolis, Indiana.  On October 22, 2014, Dr. Adams, at the age of 40, was appointed as the Health Commissioner of Indiana by then-governor Mike Pence. Less than one year after the election of President Donald Trump, the President appointed 43-year-old Adams as U.S. Surgeon General.

As the Surgeon General, Dr. Adams holds the rank of Vice Admiral in the U.S. Public Health Service Commissioned Corps.  In this capacity, he oversees the operations of approximately 6,500 uniformed health officers who serve in nearly 800 locations around the world, promoting, protecting, and advancing the health and safety of the United States.

During the worldwide novel Coronavirus (COVID-19), pandemic of 2020, Dr. Adams, as leader of the U.S. Public Health Service Commissioned Corps, quickly became one of the most publicly visible members of the Coronavirus Task Force. Pres. Trump established the task force, which his headed by Vice President Mike Pence, on January 29, 2020.

Dr. Adams’ understanding of epidemiology stemmed from his experience in leading Indiana in an earlier health crisis, the state’s 2015 HIV outbreak.  As Indiana’s Health Commissioner, Dr. Adams was tasked with tackling the outbreak, which had its epicenter in Austin in rural Scott County, Indiana. He and other health experts linked the hygienic practices of drug-users to the spreading outbreak.  To slow the progression of HIV transmission, he called for creating a clean needle exchange program.  The call was controversial and generated initial resistance from state government leaders including Governor Pence.  Adams helped persuade those officials to adopt the policy which in turn slowed the outbreak. Describing why he chose to support this policy, Dr. Adams later declared that he promised to “lead with science while listening to what stakeholders are saying, and what patients are saying.”

As Surgeon General, Dr. Adams continues his ongoing role of providing vital information for the overall health of the nation.  For example, before the Coronavirus crisis emerged, he focused on the links between community health and both economic prosperity and national security. He also leads the national health community in addressing the ongoing opioid crisis in the United States by urging the importance of public access to live-saving overdose medication, naloxone, to reduce the high mortality in drug-users.