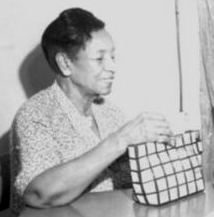 Maude Craig, public school teacher, suffragist, civil rights and community activist, was born in Austin, Texas in February 1880 to Marie Sanders Craig, a homemaker, and George Washington Craig, a grocer. In 1900, Craig graduated from Prairie View State Normal and Industrial College (now Prairie View A&M University) and taught at African American schools her entire career: in Texas, at the Emile School in Bastrop and Douglass School in El Paso; also, at Central Elementary in La Union, New Mexico in the 1920s and 1930s.

Craig moved to El Paso in 1904 and three years later married Edward D. Sampson, a janitor, realtor, and barber. She helped establish the local Phyllis Wheatley Club and led campaigns in support of World War I, including the promotion of Liberty Bonds, Junior Red Cross membership drives, and boosting the morale of black soldiers stationed at Fort Bliss and Biggs Field. From 1917 until the early 1920s, Sampson served as El Paso NAACP vice president, the first branch in the state. As a founding organizer of the El Paso Negro Woman’s Civic and Enfranchisement League and president of the El Paso Colored Woman’s Club, she was an outspoken suffragist who in 1918 attempted to apply for affiliation in the National American Woman Suffrage Association, but was rebuffed due to segregation and racism.

Sampson married dentist Emerson M. Williams in 1929. The following year she lectured on activist Frederick Douglass during the fifth annual Negro History Week celebration. The 1940s and 1950s saw Williams—as a member of the Council of Church Women and the Women’s Federated Clubs and Societies—organize programs that promoted integration, host World War II black troops, and serve as trustee of the Mary L. Peyton Foundation. In 1947 she witnessed the successful hiring of the first four black El Paso police officers.

While chair of the El Paso NAACP Legal Redress committee, Williams was a delegate to its Southwest Conference; participated on panel discussions; petitioned the city council and the Park and Recreation Board for more housing and leisure facilities; toured Black neighborhoods with mayor Fred Hervey to assess needs; and fought for the desegregation of public schools at Fort Bliss, Fabens, and Ysleta Independent School Districts. Moreover, in March 1955 Williams accompanied Thelma J. White, Douglass School valedictorian, in an unsuccessful bid to register her at Texas Western College (TWC). The El Paso NAACP immediately filed suit in US district court, White v. Smith, and won to desegregate TWC that July. Texas Western College became the first state-supported institution to desegregate at the undergraduate level.

Williams moved to Oklahoma City, Oklahoma in May 1957 and within a year died at the age of 78 when a truck struck her on March 13, 1958. The El Paso Interdenominational Ministerial Alliance honored her in 1968 by establishing a Memorial Scholarship Fund.