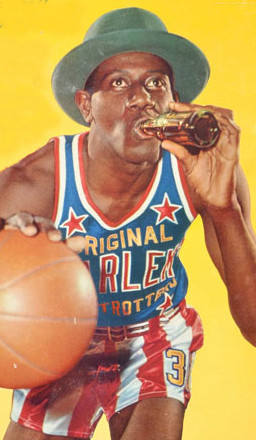 Reece “Goose” Tatum was a professional baseball and basketball player. Tatum was born on May 31, 1921 in El Dorado, Arkansas to Ben Tatum, a farmer and part-time preacher, and Alice Tatum, a domestic cook. Tatum was the fifth of seven children in the family.

Tatum attended Booker T. Washington High School in El Dorado where he played baseball, football, and basketball but didn’t graduate. During his teens, he worked at a sawmill and started to play baseball. By the time he was 16 years old he was playing professional baseball among negro league teams. The teams that Tatum played for included the Louisville Black Colonels (1937), Memphis Red Sox (1941), Birmingham Black Barons (1942), and Indianapolis Clowns twice in 1943 and between 1946 and 1949. He reportedly acquired the nickname “Goose” while playing for a baseball team in Forrester, Arkansas in the 1930s.

Tatum also had a professional basketball career beginning in 1942 when he signed with the Harlem Globetrotters. He played for the Globetrotters for two years (1941-1942) then was drafted to the U.S. Army Air Corps during World War II. He was stationed at the Lincoln Army Airfield in Nebraska where he was an entertainer to the troops. After World War II, he resumed playing basketball with the Globetrotters. During that time, he was nicknamed Clown Prince because of his comedic routines on the courts. Tatum was also credited with being one of the first professional basketball players to perfect the hook shot and to score more than 50 points in a game. He would continue to play for the Globetrotters until he retired from the team in 1954. At the time of his retirement, Tatum was making $53,000, which made him the highest-paid athlete in professional basketball. Tatum later created his own touring basketball teams that included Goose Tatum Clowns, Goose Tatum’s Harlem Stars, and the Harlem Red Kings.

Tatum’s life was often controversial. He had a violent and moody temper and was rumored to have stabbed an opposing pitcher with a screwdriver. He was also arrested several times from attacking police officers and nonpayment of alimony and taxes.

Reece “Goose” Tatum died from a heart attack on January 18, 1967 in El Paso, Texas at the age of 45. In 1974, Tatum was introduced to into the Arkansas Sports Hall of Fame. On February 8, 2002, his number 50 jersey was retired by the Harlem Globetrotters and entered into the Globetrotters “Legends” Ring at Madison Square Garden in New York City, New York. In 2011, he was elected to the Naismith Basketball Hall of Fame.

Tatum was married to Nona Alford Tatum. The couple had two children, Marjorie A. Tatum, and Reece Tatum Jr., who was killed in a car accident in 1966. Tatum was also briefly married to burlesque dancer Lottie “The Body” Groves whom he met in San Francisco.