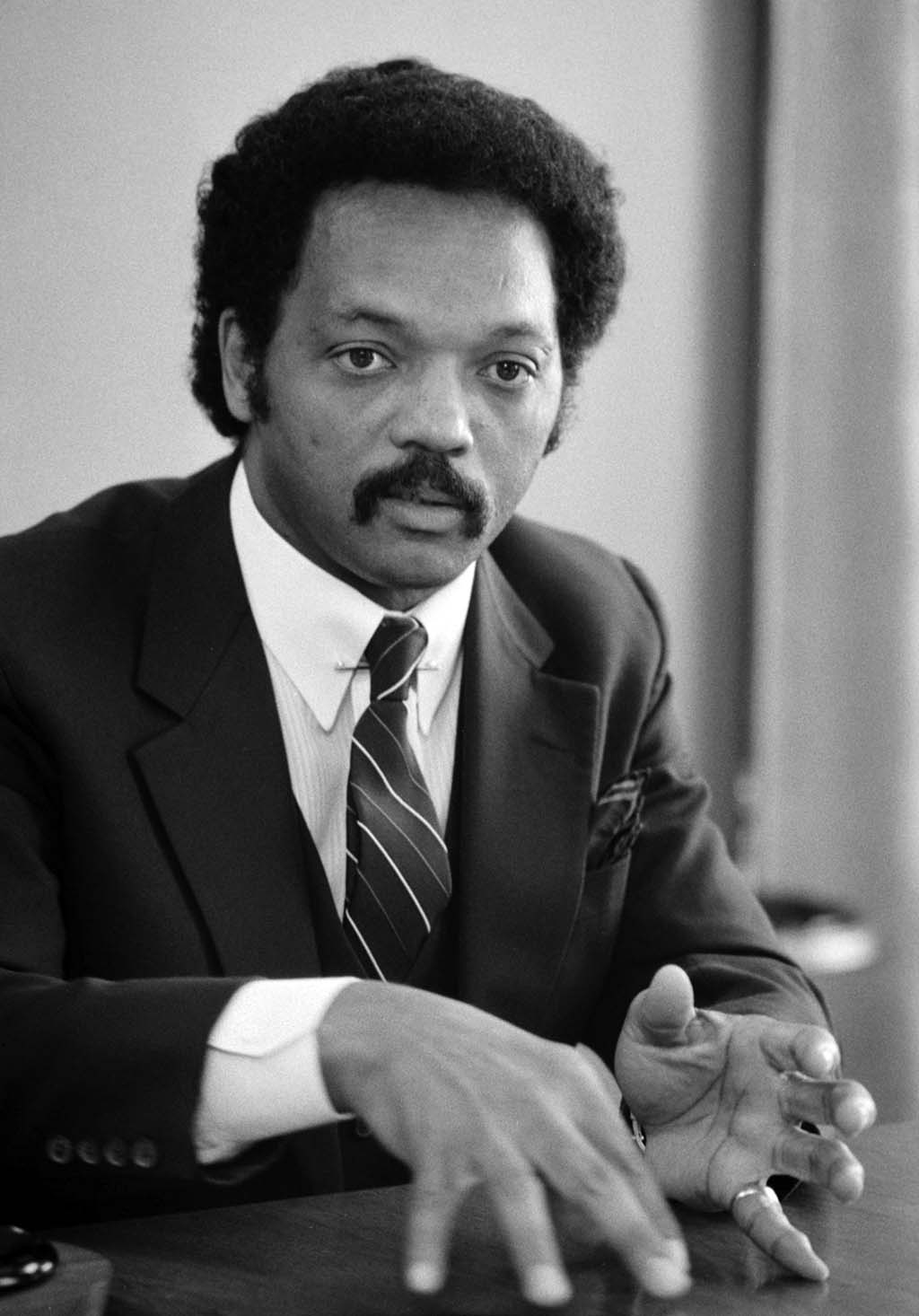 Jesse Jackson speaking during an interview in July 1, 1983
Courtesy Library of Congress (LC-DIG-ppmsc-01277)

Long before he became a minister, head of the Southern Christian Leadership Conference’s Operation Breadbasket, Operation PUSH (People United to Save Humanity), and founder of the Rainbow Coalition, Jesse Louis Jackson impressed his family and close friends as a person destined for greatness.  Born Jesse Burns in Greenville, South Carolina on October 8, 1941 to Helen Burns, a 17 year old unwed high school student and Noah Robinson, her older married neighbor, young Jesse took the surname Jackson from his adopted father, Charles Jackson, who later married Burns.  Insecure owing to the circumstances of his birth, Jackson decided to make himself a father figure and leader of his people.

Tall and imposing at 6’ 4”, Jackson became a star high school quarterback and earned a football scholarship at the University of Illinois in 1959.  After one year at Illinois he transferred to North Carolina Agricultural and Technical (A & T) University in Greensboro, North Carolina partly because he was not allowed to play quarterback.  At A & T, Jackson used his oratorical skills and charismatic personality to become the student body president.  Encouraged to test his leadership skills, Jackson led his first march to downtown Greensboro in 1962.  Under the guidance of A & T President, Dr. Samuel Proctor, Jackson enrolled at the Chicago Theological Seminary where he planned to train for the ministry.  Jackson was ordained a Baptist minister in 1968 although he left the Seminary two years earlier to work full time in the Civil Rights Movement.

Jackson’s introduction to the Movement came in 1965 when he traveled to Selma, Alabama to join in the campaign for voting rights.  While there Jackson met Dr. Martin Luther King, Jr., the man who would launch his career as a national civil rights leader.  Through King’s influence, Jackson quickly established himself prominently within King’s organization, the Southern Christian Leadership Conference.  When SCLC launched its first northern campaign in Chicago in 1966, Jackson was put in charge of its Operation Breadbasket which used boycotts and selective buying campaigns to win contracts for black businesses and jobs for black workers.  During the years Jackson headed Operation Breadbasket (1966 to 1971), the campaign generated over three thousand jobs for Southside Chicago residents and enlarged the income of the area by $22 million.  Despite its success, Jackson and Rev. Ralph Abernathy, Dr. Martin Luther King’s successor at SCLC, clashed.  In 1971, Jackson left the organization and found Operation PUSH where he continued his campaign of economic empowerment.

By the early 1980s Jackson had acquired a national reputation as a racial justice activist.  That reputation was enhanced when in 1983 he traveled to Syria and made a dramatic personal appeal to Syrian President Hafez al-Assad to secure the release of a captured American pilot, Navy Lt. Robert Goodman, who had been shot down over Lebanon.  In June 1984 Jackson traveled to Havana to meet with Cuban President Fidel Castro to negotiate the release of 22 Americans being held by Castro’s government.

In 1984, following the success of his Syrian mission, Jesse Jackson mounted the second major effort by an African American (after Shirley Chisholm in 1972) to seek the Democratic nomination for President of the United States.  He and his followers adopted the term “Rainbow Coalition” to describe the broad coalition of groups of color, working poor, gays and lesbians, and white progressives that Jackson hoped would propel him to the nomination and eventually the White House. Despite controversial anti-Semitic remarks made during the campaign, Jackson ran a surprisingly strong race, winning primaries in five states including Michigan.  Jackson garnered 21% of the primary vote but gained only 8% of the delegates and ultimately lost the nomination to former Vice President Walter Mondale.

Jackson mounted a second effort in 1988, this time winning more than seven million primary votes across the nation in another failed attempt to win the nomination.  After winning the South Carolina primary, finishing second in the Illinois primary and winning the Democratic caucus in Michigan, Jackson became the Democratic frontrunner.  Massachusetts Governor Michael Dukakis recaptured the lead with wins in the Colorado and Wisconsin primaries forcing Jackson to drop out of the race.

Jesse Jackson did not make another bid for the presidential nomination and since 1992 has functioned as a power broker within the Democratic Party.  In 1990 he won the largely ceremonial position of District of Columbia’s statehood senator, a platform from which he argued for statehood for the nation’s capital.  In 1997 Jackson launched the Wall Street Project which encouraged African Americans to become stockholders to use their leverage to force changes in corporate culture and behavior.  Two years later Jackson engaged in personal diplomacy once again when during the Kosovo War he traveled to Belgrade to meet with Yugoslav  (now Serbia) president Slobodan Milosevic where he secured the release of three U.S. prisoners of war.  In the same year, 1999, he brokered a cease-fire in war-ravaged Sierra Leone.

Both his supporters and critics describe Jackson as bold, defiant, and controversial. He has elicited praise for inspiring the poor with speeches punctuated by catchword phrases such as “I am somebody” and “keep hope alive.” Critics, however, blamed Jackson for mounting blatantly self-promoting campaigns that exploited racial grievances and inflamed racial outrage.  The revelation that Jackson, married since 1962, fathered a child in 2001 with Rainbow Coalition staffer Karin Stanford, sullied his well-crafted public image as a moral leader. Nevertheless, Jesse Jackson remains enormously popular both in the United States and abroad.

On Sunday, August 20, 2021, it was announced that Rev. Jackson and his wife, Jacqueline Jackson, have COVID-19, and are being treated in a Chicago area hospital.