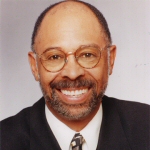 H. Viscount Nelson received his baccalaureate at West Chester University and earned an M.A. and Ph.D. in History from the University of Pennsylvania. Currently he is the Director of Student Activities at UCLA and teaches in the Afro-American Studies Department. In addition to numerous articles, his publications include America: Changing Times: A Brief History, (John Wiley and Sons, 1980); The Rise and Fall of Modern Black Leadership: Chronicle of a Twentieth Century Tragedy, (University Press of America, 2003) and Black Leadership’s Response to the Great Depression in Philadelphia, (The Edwin Mellen Press, 2006). Articles Dr. Nelson has written include “Philadelphia’s Thirtieth Ward, 1940-1960,” Pennsylvania Heritage, Spring, 1979; “Philadelphia’s Thirtieth Ward, 1900-1940,” Journal of Black Studies,Negro History Bulletin Fall, 1980, and “Before the Revolution: Crisis Within the Philadelphia and Chicago NAACP, 1940-1960,” , January-March, 1988. He also has articles that appear in the Encyclopedia of Black Studies and Encyclopedia of the Harlem Renaissance for 2005. Dr. Nelson is a long-standing member of the Simon Wiesenthal Museum of Tolerance. His wife Joan K. Nelson, is an Associate Dean of Students at UCLA.

Long before he became a minister, head of the Southern Christian Leadership Conference’s Operation Breadbasket, Operation PUSH (People United to Save Humanity), and founder of the Rainbow Coalition, Jesse Louis Jackson impressed his family and close friends as a person destined for greatness.  Born Jesse … END_OF_DOCUMENT_TOKEN_TO_BE_REPLACED

Raymond Pace Alexander, a prominent civil rights activist, jurist, and Harvard-trained attorney was born on October 19, 1897 in Philadelphia to a family of seven,  His father, Hillard Boone Alexander, and his mother, Virginia Pace, both were former slaves who migrated to Philadelphia from Virginia … END_OF_DOCUMENT_TOKEN_TO_BE_REPLACED

“If I had nine lives, I’d want to be a lawyer every day of every one, I enjoy it so.”  With this sensibility and love for the legal system, Juanita Kidd Stout made the correct decision in choosing her life’s work.  Juanita Kidd Stout established … END_OF_DOCUMENT_TOKEN_TO_BE_REPLACED

Channing H. Tobias acquired fame through his work with the YMCA.  Born in Augusta, Georgia on February 1, 1882 to Fair and Bell Robinson Tobias, young Channing received his bachelor’s degree from Paine College in 1902.  Tobias left Georgia to study religion at Drew Theological … END_OF_DOCUMENT_TOKEN_TO_BE_REPLACED