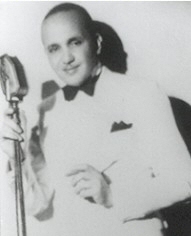 Born December 18, 1897 to a middle class family in Cuthbert, Georgia, Fletcher Henderson grew up to become one of the key figures in the development of the form and style of the large jazz orchestra.  Despite the fact that he grew up in a family devoted to music and practiced constantly, he graduated from Atlanta University with a degree in mathematics and chemistry.  After moving to New York in 1920, however, Henderson found that a color barrier stood against his chances of becoming a chemist, and so it was at this time that he turned to his musical skills to make a living.

After a short time Henderson became a music director for Black Swan Records, and through this work he was able to assemble some of New York’s best musicians to start his own band.  In 1924 Henderson began playing in the Roseland Ballroom, and over the next ten years he helped transform the Roseland into a premier venue for jazz in New York while his band became known as the greatest jazz orchestra in the city.

Over the years Henderson, a member of Alpha Phi Alpha Fraternity, was able to enlist such great musicians as Coleman Hawkins, Kaiser Marshall, Don Redman, and even Louis Armstrong into his band and with their help he was able to help develop jazz big band as it is known today.  In the 1930s Henderson’s band began to come apart, and in 1939 Henderson was forced to give it up and become a music arranger for Benny Goodman.  Although he attempted to lead bands throughout the 1940s, he was never quite successful, and a stroke in 1950 effectively ended his career and left him partially paralyzed until his death on December 29, 1952.