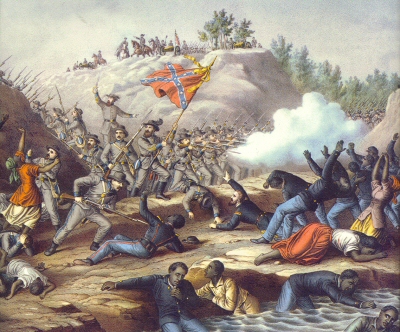 On April 12, 1864, some 3,000 rebels under the command of Nathan Bedford Forrest overran Fort Pillow, a former Confederate stronghold situated on a bluff on the Tennessee bank of the Mississippi, some 40 miles north of Memphis. The garrison consisted of about 600 Union soldiers, roughly evenly divided between runaway slaves-turned-artillerists from nearby Tennessee communities and white Southern Unionist cavalry mostly from East Tennessee. Under a flag of truce which his men violated by creeping up on the fort, Forrest demanded the garrison’s surrender, threatening that if it refused he would not be responsible for the actions of his men. Believing Forrest was bluffing, Bradford refused, whereupon the Confederates swarmed over the parapet.

The overwhelmed garrison fled down the bluff to the river, where they were caught in a deadly crossfire. Forrest’s men continued to shoot well after the Federals had thrown down their weapons, and many men were killed in hospital tents or as they begged for mercy. By the next morning only about 65 blacks had survived a massacre that had continued intermittently through the night. More than seventy percent of the white survivors would perish in rebel prisons. The Confederates lost about 18 killed.

Northern Radicals seized on the massacre to inflame a wavering Northern public. Though Forrest initially described the river as “dyed with the blood of the slaughtered for 200 yards,” and his field commander bragged that his men had taught “the mongrel garrison” a memorable lesson, Forrest and his staff later either denied there was a massacre or blamed it on the garrison itself.

The Fort Pillow affair became a target of Southern revisionists, and many reference works balk at deeming the battle a massacre. But recent accounts drawn from primary sources conclude emphatically that a massacre did indeed transpire, and that Forrest’s field officers did little to stop it, for which Forrest himself bears the ultimate responsibility.