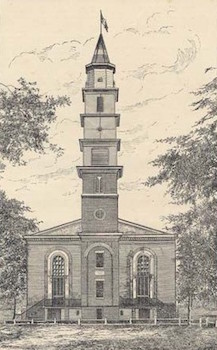 First African Baptist Church, located in the historic district of Savannah, Georgia, is recognized as one of the nation’s oldest African American Baptist Churches. Although the church was not officially established until 1788, the original congregation of mostly enslaved individuals had been formed in 1773 by former slave George Leile, who was ordained in 1775.

Leile was assisted by two local enslaved individuals he baptized, David George and Andrew Bryan, and formed a congregation named the Silver Bluff Baptist Church in Aiken County, South Carolina. He converted local slaves over the next few years. After the Revolutionary War began, George Leile and David George escaped to freedom in Canada, but Andrew Bryan stayed with the congregation.

The current building was completed in 1859. The pipe organ, baptismal pool, and light fixtures are all original, as well as the solid oak pews in the main sanctuary, made by enslaved church members. The original church steeple extended 100 feet but was destroyed by a hurricane in 1892. The church ceiling, in the design of the “Nine Patch Quilt,” recalls that the church was once a safe house for fugitive slaves. Beneath the lower auditorium floor is another sub-floor, evidence that the church was used as an Underground Railroad station. The holes in the floor are in the shape of an African prayer symbol, known as a “Congolese Cosmogram.” The church’s museum houses memorabilia that dates back to its origins.

First African Baptist Church served as the largest gathering place in Savannah, Georgia, for blacks and whites to meet during the era of segregation. Reverend Emmanuel King Love, sixth pastor, led the movement to establish Savannah State University, formerly known as Georgia State Industrial College for Colored Youth in 1890, and he also played a significant role in the establishment of Morehouse College in Atlanta and Paine College in Augusta, Georgia. The civil rights museum in Savannah, Georgia, is named in honor of former pastor, Rev. Dr. Ralph Mark Gilbert, for his courageous work during the civil rights movement in the South.

Currently, Reverend Thurmond N. Tillman serves as the seventeenth pastor of the church. He was called to serve as pastor in 1982.