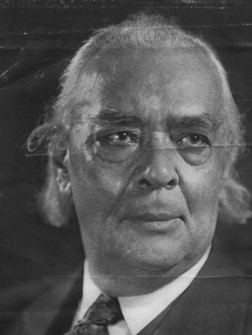 Stage performer Richard B. Harrison found his passion for acting as a child.  He devoted his life to pursuing this passion in the face of Jim Crow, finally becoming nationally acclaimed in the last years of that life. Harrison was born on September 28, 1864 in London, Ontario, Canada, to Thomas L. Harrison and Ysobel Benton who had escaped slavery through the Underground Railroad.

Growing up in Ontario, Harrison loved to recite poetry and attend the local theater.  He also performed his own plays for his neighbors. When his father died in 1881, Harrison became the main provider for his family at age seventeen.  He moved to Detroit to work at the Russell House hotel.  While in Detroit, Harrison met Chambless Hull, a theater manager, who arranged for him to study at the Detroit Training School of Art.  After graduating in 1887, Harrison sought work as an actor but was rejected because of his race.

In response to this discrimination in the white theater industry he began touring the United States and Canada putting on one-man shows and reciting poetry in tents, churches, and schools.  In 1893 Harrison travelled to Chicago for the World’s Columbian Exposition where he met the noted black poet, Paul Laurence Dunbar.  The two became good friends.  Dunbar was Harrison’s best man when he married Gertrude Janet Washington in 1895 in Chicago.

Harrison continued his tours into the early twentieth century, which now included theaters in Mexico as well as the United States and Canada, under the sponsorship of the Great Western Lyceum Bureau of California.  By 1913, he performed at the first black-owned theater, the Pekin, in Chicago.  Theatrical performances, however, never completely supported his family, so he intermittently worked as a porter and a waiter.  Constantly on the move and under pressure to learn scripts, Harrison suffered a nervous breakdown in 1922.  Afterward James B. Dudley, President of North Carolina Agricultural and Technical (A&T) College at Greensboro, offered Harrison the position of Chair of the Department of Dramatics.  Harrison, interested in improving the theatrical training of African Americans, remained at the college for seven years and led the effort to strengthen its programs.

Richard Harrison left A&T College in 1929 when he was offered the role of “De Lawd” in Marc Connelly’s play The Green Pastures. The play told the story of the Old Testament with one of the first all-black casts on Broadway.  Although this was by far the most important theatrical opportunity of his career, Harrison was initially reluctant to accept the role fearing to play the stereotypical dumb and lazy black person. Despite these concerns, Harrison accepted the role.  The Green Pastures became extraordinarily popular as audiences were impressed by the dignity and passion of Harrison’s character.

Harrison never missed a show, which numbered more than 1,650 in 203 different cities and towns.  The play and its leading actor won multiple awards and were featured on the cover of Time magazine on March 4, 1935.  Only ten days after Time lauded the play, however, Richard Harrison died of heart failure on March 14, 1935 at the age of 71.  Two funeral services were held for Harrison.  The first was at St. Philip’s Church in Harlem and second was at the Cathedral of St. John the Divine in Chicago where he was buried. Thousands of people came to his funerals in order to honor the man who had enchanted the country with his portrayal of “De Lawd”.