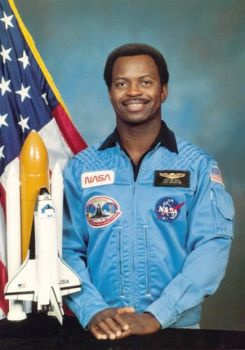 Ronald Erwin McNair was a physicist and one of the first African American astronauts to go into space.  He was also the first black astronaut to die on a space mission.  McNair was born to Carl McNair, an auto body repairman, and Pearl McNair, a high school teacher, on October 21, 1950 in Lake City, South Carolina.  He grew up in Lake City picking cotton and tobacco until he graduated from Carver High School in 1967.

Following his graduation from MIT in 1976, Dr. McNair became a physicist at Hughes Research Laboratories in Malibu, California.  The National Aeronautics Space Administration (NASA) selected him as an astronaut candidate in January  1978.   As a candidate, he finished a one-year training and evaluation period in August 1979, making him a competitive applicant as a mission specialist astronaut on space shuttle flight crews.

McNair flew his first mission on February 3, 1984, as a mission specialist on STS 41-B, which marked the first flight of the Manned Maneuvering Unit.  This was the first landing of the Space Shuttle Challenger on Kennedy Space Center’s runway on February 11, 1984.  The flight culminated in McNair achieving 191 hours in space.

In 1986, Dr. McNair was given a mission specialist position on STS 51-L, which was the final flight of Challenger.  On January 28, 1986, one minute and fifty-three seconds after liftoff from the Kennedy Space Center, Florida, Challenger exploded, killing all of the crew on board. This included McNair along with Michael J. Smith, Judith Resnick, Francis “Dick” Scobee, Ellison Onizuka, Christa McAuliffe, and Gregory Jarvis.

In addition to his career as a physicist and astronaut, Dr. McNair held a fifth degree black belt in karate and was also an accomplished performing jazz saxophonist.

Dr. McNair is survived by his wife, Cheryl, and their two children.