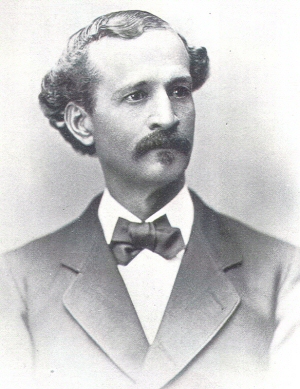 One of Colorado Territory’s most interesting African American citizens spoke eloquently on behalf of black suffrage between 1863 and 1873, a decade of great debate on this particular subject. William Jefferson Hardin had been born to a free quadroon woman and a white father in Russellville, Kentucky in 1831. Raised and educated by Kentucky Shakers, he became a teacher for “free children of color” in Bowling Green, Kentucky. He came to Colorado Territory in 1863 because all men in the territories over the age of twenty-one had the right to vote. When the law was amended in 1864 to exclude black men, Hardin began to use his considerable skills as a speaker to challenge the characterization of black men as “uncivilized.” Soon he began making direct appeals to newspapers and members of Congress for a repeal of suffrage restrictions and for public education for black children. Congress gave African American males in all United States territories the right to vote in 1867.

Despite his efforts on their behalf, Hardin alienated many black Denverites by lecturing them on manners and publicly suggesting that they deserved to be excluded from public places if they did not “observe expected decorum.” He also alienated some of Denver’s black leaders by failing to acknowledge their efforts toward voting rights and education.

Hardin supported the Republican Party, becoming an at-large delegate to the national convention in 1872. He also earned an appointment as a weigher at Denver’s United States Mint. His reputation suffered when he married a white Denver woman in 1873 and was confronted by a Caroline K. Hardin who appeared with documents proving he was already married to her. He lost his job in the ensuing scandal and moved to Cheyenne, Wyoming, where he took up the barbering profession. Hardin remained active in politics, serving in the Wyoming territorial legislature between 1879 and 1882. Hardin is believed to have died in Leadville in 1889 or 1890.