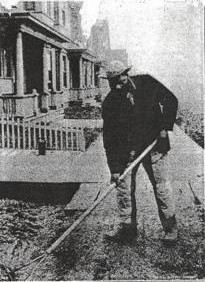 Green Fields, former Seattle City employee, early African American resident of the Queen Anne Neighborhood in Seattle, and soldier with the U.S. Colored Troops during the Civil War, was born a slave in DeSoto, Mississippi, the son of Fannie Jackson and Richard Fields. In 1864 he escaped slavery and joined the Union Army in St. Louis, Missouri as a substitute soldier for an Edward Waite. Fields was enrolled as a private and by December, 1864 he was enrolled as a corporal in Company I, 2nd United States Colored Light Artillery. On October 5, 1865, Fields married Martha Flinn while stationed near Memphis, Tennessee. He later adopted her son, Lewis. Green Fields was discharged from the U.S. Army in Memphis on December 22, 1865 without seeing any military action.

After completing military service, Green and Martha Fields spent several years in Memphis before moving to St. Louis Missouri and then to Seattle Washington in 1893, where they took up residence in the Queen Anne Neighborhood. For many years Fields worked for the city of Seattle as a street cleaner. He saved his money to purchase a modest home in the Queen Anne area. By the late 1890s Fields pointed with pride to his status as a rare African American Civil War veteran in the Pacific Northwest.

Green Fields died in Seattle in 1914, leaving behind a wife, Martha, stepson Lewis and daughter-in-law Della. He was buried in the city’s Mt. Pleasant Cemetery. In 2007 Fields’s grave was marked with a new headstone acknowledging his military service during the Civil War.