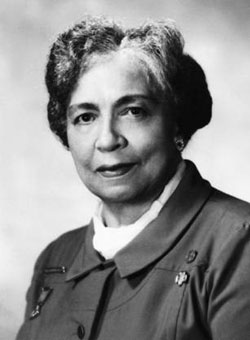 Physician, educator, and social activist Dorothy Celeste Boulding Ferebee led efforts to improve the health care of African Americans.  As a member of several civic organizations, she fought to lower the mortality rate among African Americans in southern rural communities.  She also used these organizations as a vehicle to promote civil rights.

Dorothy Celeste Boulding Ferebee was born in Norfolk, Virginia, to Benjamin and Florence Boulding on October 10, 1898. When her mother became ill, Dorothy’s parents sent her to live with her great aunt in Boston, Massachusetts. Between 1904 and 1908, Boulding attended school in Boston and in 1915 graduated at the top of her class from English High School. Five years later she graduated from Simmons College in Boston and then immediately entered Tufts University School of Medicine, graduating with top honors in 1924.

Despite her impressive educational credentials, Boulding was not allowed to intern at white hospitals in the Boston area.  Instead, she did her internship at the black-owned and staffed Freedmen’s Hospital in Washington, D.C. Upon completion of her internship in 1925, she started her own medical clinic in an impoverished section of the city.

In 1929, Boulding was appointed medical physician to women for Howard University. One year later she married Claude Thurston Ferebee, a professor in Howard University’s College of Dentistry. The couple had twins, a boy and a girl. In 1949 Boulding Ferebee was named medical director for Howard’s Health Services, a post she held until retirement in 1968.

Although Ferebee continued to reside in Washington and work at Howard, she spent the summers of 1935-1942 as director of the Mississippi Health Project, a program sponsored by the Alpha Kappa Alpha Sorority to provide health care to sharecropper families in Holmes and Mound Bayou Counties. Ferebee also became active in the civil rights movement as a member of the National Council of Negro Women (NCNW). In the fall of 1949, the organization elected Ferebee president, succeeding Mary McLeod Bethune.

Under her leadership NCNW’s programs publicly addressed and opposed racial discrimination against black men and women in education, employment, housing, voting, the military, and health care. Besides her membership in the NCNW, Ferebee founded the Women’s Institute which advocated adequate healthcare for women. She also served as a member of the American Public Health Association, the Pan American Medical Women’s Alliance, the American College Health Association, the National Medical Association, the White House’s Children and Youth Council, and UNICEF. During her distinguished career, she received numerous honors and awards for her community service.