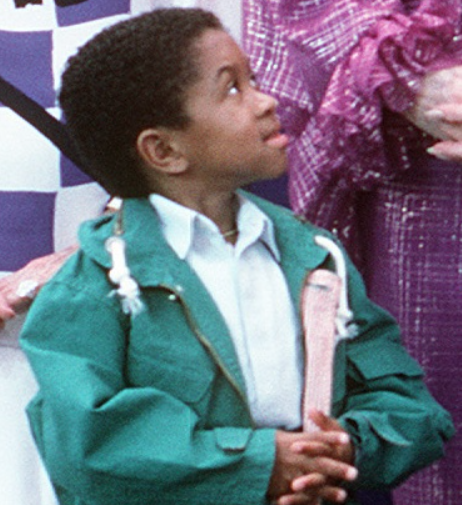 Emmanuel Lewis is an actor and singer, best known for his role in the 1980s sitcom Webster. Lewis was born on March 9, 1971, in Brooklyn, New York. His parents divorced when he was two years old, and he and his siblings were raised by their mother Margaret Lewis, a computer science specialist. He graduated from Midwood High School in 1989, and later attended Clark Atlanta University, graduating in 1997 with a BA in Theater Arts.

In 1976 a friend suggested that Lewis pursue an acting career, and his mother contacted the Shuller Talent Agency for an interview. Lewis was hired on the spot and began his career by appearing in over fifty television commercials and advertisements. He became the spokesperson for Burger King’s Whopper. Lewis’s first acting job outside of television was in the Joseph Papp New York Shakespeare Festival Production of A Midsummer Night’s Dream. In 1983, at the age of twelve Lewis was cast for the title role in the sitcom Webster. The series aired between 1983 and 1989, and Lewis appeared in all 150 episodes through six seasons. He won four consecutive People’s Choice Awards for Favorite Young TV performer between 1984 and 1987. Lewis entered the music industry in Japan in the 1980s, founding his own record label, Emmanuel Lewis Entertainment. He released two singles, “City Connection” and “Love is DANDAN.” “City Connection” peaked at Number Two on Japan’s Orion chart.

Through his career, Lewis appeared in many made-for-TV movies including Lost In London (1985) with Ben Vereen. He appeared in other TV shows as himself including Family Matters, Moesha, and The Love Boat. Lewis sang “White Christmas” at the White House for President Ronald Reagan in December 1985. He appeared in a 2001 TV child stars episode of The Weakest Link and in a 2002 Denny’s commercial. Lewis had cameo appearances in the 2007 film Kickin’ It Old Skool, and a 2013 episode of Between Two Ferns with Zach Galifianakis. Aside from his professional career, Lewis is also a trained in the martial art of Taekwondo, is a student of Billy Blanks Tae-Bo, and has a black belt in Karate. He owned a limousine company and a car wash throughout much of his career.

The 3-foot, 6-inch actor has no specific medical reason for his size, and has grown just six inches since the age of twelve. He is an 33rd degree Prince Hall Scottish Rite Mason, member of W.C. Thomas Lodge No.112 PHA, in Atlanta, Georgia. Lewis is also a former Commander-in-Chief of the Atlanta Consistory No.24A in the orient of Georgia, and active in the Prince Hall Masonry research society, the Phylaxis Society. He currently divides his time between his homes in Atlanta, Georgia, and Los Angeles, California, both of which he shares with his mother and siblings.