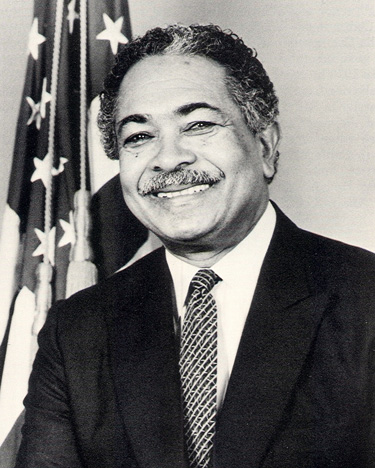 Dymally was born on the West Indian island of Trinidad on May 12, 1923.  After high school he was a reporter for The Vanguard, the publication of the Oil Workers Trade Union.  He left Trinidad at 19 to study Journalism at Lincoln University in Missouri. After deciding that Midwest winters were too cold he transferred to Chapman College in California and later to Los Angeles State College where he graduated with a B.A. in Education. After college he received his M.A. in Government from California State University in Sacramento and a Ph.D. from the United States International University (now Alliant International University).

After his Ph.D. was complete Dymally he became a teacher of handicapped students in the Los Angeles Unified School District. He also was a lecturer at several universities including Central State University in Ohio and Charles R. Drew University of Medicine in Los Angeles.

During his teaching career Dymally joined the Young Democrats organization and rose through the ranks to become the California State Treasurer. When Senator John Kennedy ran for President, in 1960, he made Dymally a Field Coordinator in his campaign. In 1962 Dymally ran for office for the first time.  He campaigned for a seat in the California Assembly and won.

Dymally represented South Los Angeles, which covered the areas of Compton, Paramount, and North Long Beach. While in the California Assembly he served as the Chairman of the Assembly Democratic Study Group, which was committed to promoting progressive social and economic legislation. In 1966 Dymally became the first African American elected to serve in the State Senate and soon became the Chairman of the Senate Majority Caucus.

In 1974 Dymally once again made history when he became the first African-American Lt. Governor of the state of California.  In 1981 he was elected to the United States Congress where he represented South Los Angeles County. Dymally was the first foreign-born black person to serve as a member of Congress.  While in that body he served as the Chairman of the Congressional Black Caucus and the Chairman of the Foreign Affairs Subcommittee on Africa.

Dymally retired from Congress in 1992.  In 2002 at the age of 79, he was once again elected to the California Assembly from his old district and continues to fight for progressive causes.