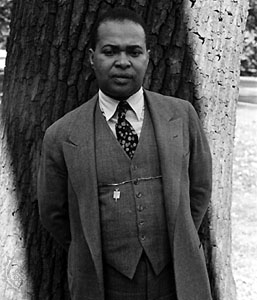 Although the facts regarding his birthplace and biological parents are inconclusive, Countee Cullen’s formative years were spent in New York City. The adopted son of Reverend Dr. Frederick A. Cullen, pastor of Salem Methodist Episcopal Church and president of the Harlem branch of the National Association for the Advancement of Colored People (NAACP), and Carolyn Cullen, a classically trained musician and singer, Countee was raised in a racially-conscious, conservative, middle-class environment. He attended the prestigious DeWitt Clinton High School in Manhattan, where he edited the school newspaper and worked as the associate editor of the school’s literary magazine. He earned his bachelor of arts from New York University, graduating Phi Beta Kappa in 1925. Cullen received an M.A. in English at Harvard in 1926, after which he returned to New York to write and edit for the National Urban League’s magazine, Opportunity.

Cullen’s talent as a poet was recognized at an early age. While both a high school student and an undergraduate, his poetry won several awards, and he consistently published in some of the leading magazines and journals, including Crisis and Harper’s. His first collection of poems, Color, was published in 1925, placing him squarely in the arts movement known as the Harlem Renaissance. Cullen’s conventional approach to poetry, both in form and subject matter, put him at odds with several of the younger writers of the Renaissance, including Langston Hughes and Wallace Thurman, although they all deeply respected one another. Cullen frowned upon Hughes’s experimentation with poetic form within a jazz idiom, and like some of the more conservative writers such as W.E.B. Du Bois and Jessie Fauset, he advocated for literature to represent the more respectable aspects of black life.

Cullen went on to publish several collections of poems, an anthology of African American verse, a novel, and two children’s books. He arguably penned some of the most recognizable poems to African Americans, including “Heritage” and “Yet Do I Marvel.”

Although there is very strong historical evidence that Cullen privately identified as a gay man, he never led an openly gay lifestyle. Rather, he married Du Bois’ daughter, Yolande, in 1929, but they divorced in 1930. He married Ida Roberson in 1940, by which time he was a teacher in the New York City public school system. Cullen, a member of Alpha Phi Alpha Fraternity, died in 1946, at the tragically young age of 43.