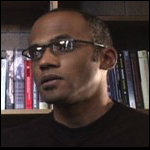 Martin Summers, Associate Professor of African and African American Studies at Boston College, received his Ph.D. in U.S. History from Rutgers University in 1997.  He taught at the University of Oregon and the University of Texas before moving to Boston College.  Professor Summers teachers courses in African American history as well as the history of gender, race and sexuality in the U.S.  His publications include Manliness and Its Discontents: The Black Middle Class and the Transformation of Masculinity, 1900-1930 (Chapel Hill: University of North Carolina Press, 2004), “Diasporic Brotherhood: Freemasonry and the Transnational Production of Black Middle Class Masculinity,” in Gender and History (November 2003); and “’This Immoral Practice’: The Prehistory of Homophobia in Black Nationalist Thought,” in Toni Lester, ed., Gender Nonconformity, Race, and Sexuality (Madison: University of Wisconsin Press, 2002).  Summers is currently researching race and mental illness in the nineteenth and twentieth-century U.S.

Born in Bay St. Louis, Mississippi in 1901, Richmond Barthé moved to New Orleans, Louisiana at an early age. Little is known about his early youth, except that he grew up in a devoutly Roman Catholic household, he enjoyed drawing and painting, and his formal … END_OF_DOCUMENT_TOKEN_TO_BE_REPLACED

Jean Toomer was born into an elite black family in Washington, D.C. in 1894. Abandoned by his father as a newborn and losing his mother to appendicitis as a teenager, Toomer spent his formative years in the home of his grandparents, P.B.S. and Nina Pinchback. … END_OF_DOCUMENT_TOKEN_TO_BE_REPLACED

Although the facts regarding his birthplace and biological parents are inconclusive, Countee Cullen’s formative years were spent in New York City. The adopted son of Reverend Dr. Frederick A. Cullen, pastor of Salem Methodist Episcopal Church and president of the Harlem branch of the National … END_OF_DOCUMENT_TOKEN_TO_BE_REPLACED