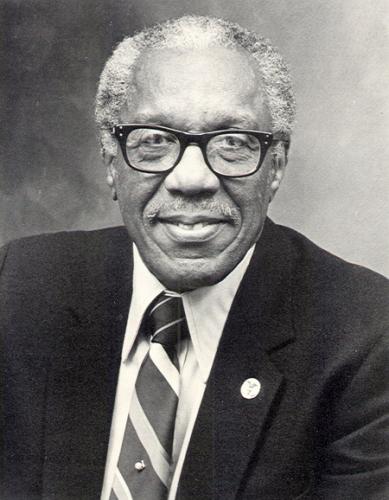 George William Crockett Jr. was born in Jacksonville, Florida, on August 10, 1909 to George William Crockett Sr., and Minnie Amelia Jenkins.  His father was a Baptist minister and railroad carpenter and his mother was a Sunday School teacher and poet.  Crockett grew up in Jacksonville, attending public schools there until his graduation from Stanton High Schoo1 in 1927.  He then graduated from Morehouse College in 1931 with a B.A. in history and the University of Michigan where he received his J.D. in 1934. Crockett was admitted to the Florida bar in 1934 and soon afterwards began his long career in politics.

In 1937 Crockett helped found the National Lawyers Guild, the first racially integrated bar association in the United States.  Two years later Crockett became the first African American lawyer hired by the United States Department of Labor, where he worked on employment cases under the National Labor Relations Act.  During World War II Crockett became a hearing officer for the Federal Fair Employment Practices Committee (FEPC).  Keenly aware of racial segregation and discrimination in labor unions, Crockett, after leaving the Labor Department, became the director of the Fair Employment Practices Department of the International United Auto Workers (UAW) Union, 1944, a post that brought his return to Michigan.

In 1948 Crockett became a member of the legal team that defended eleven Communist leaders including Gus Hall, the head of the U.S. Communist Party, and former New York City Councilman Benjamin J. Davis, who were charged with violating the Smith Act.  While defending his clients, Crockett and four other defense attorneys were sentenced by Federal Judge Harold Medina to the U.S. Penitentiary in Ashland, Kentucky for contempt of court.  Crockett served four months in prison before being released in 1952.  Soon after his release Crockett represented future Detroit Mayor Coleman Young who was investigated by the House UnAmerican Activities Committee.

In 1964 Crockett led a team of lawyers in Jackson, Mississippi who defended civil rights workers participating in the Mississippi Freedom Summer Project.  Crockett and other attorneys searched for missing civil rights workers James Chaney, Andrew Goodman, and Michael Schwerner when local police officials refused to investigate their disappearance.  Eventually the bodies of the three young men were discovered.

In 1966 Crockett was elected a judge of the Recorders Court in Detroit, a position he held for the next eight years.  In 1974 he was elected Chief Judge of the Court for a four year term before retiring.  In 1980 George Crockett declared his candidacy for Michigan’s 13th District Congressional seat left vacant by the resignation of Congressman Charles Diggs.  Crockett won the special election.  House Speaker Thomas “Tip” O’Neill swore Crockett into his seat on November 12, 1980.  Crockett’s wife, Dr. Harriett Clark Crockett, and son, George W. Crockett III, were at the ceremony as was his 96-year-old mother, Mrs. Minnie Crockett who recited a poem for the occasion.

Though Crockett was elected to Congress at the age of 71, he would continue to represent the people of the 13th District for a decade.  His political interests focused on South Africa’s policy of apartheid. As a member of the House Africa Subcommittee he authored the Mandela Freedom Resolution which called on the South African government to free Nelson Mandela.  In 1984, Crockett, Detroit Mayor Coleman Young and others were arrested and jailed for anti-apartheid protests outside the South African Embassy in Washington, D.C.

Crockett also criticized President Ronald Reagan’s failure to appoint African American ambassadors. In 1988, Crockett would be appointed to the U.S. delegation to the United Nations, ironically by President Ronald Reagan.  Before his appointment began, Crockett’s last legislation was a highly controversial act to have some illegal drugs “decriminalized.”

Crockett, a member of Kappa Alpha Psi Fraternity, retired from the U.S. Congress on January 3, 1991 at the age of 82.  He continued to be politically active in Detroit until his death on September 7, 1997, five days after a stroke.