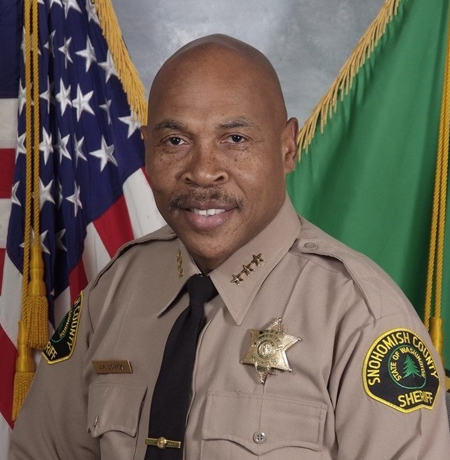 John Lovick is one of the most successful African American politicians in Washington state history. He has held a number of political positions at the state and county level and is currently a member of the Washington State House of Representatives for the 44th District which includes Mill Creek, Marysville, Lake Stevens, the town of Snohomish, and portions of unincorporated Snohomish County. From May 2019 to January 2020 Lovick was the Acting Speaker of the Washington House of Representatives, the first Black person to hold that post. He has also served at the Snohomish County Executive (2013-2015), another first for an African American. Finally, he was the first African American elected sheriff west of the Mississippi River in the 20th or 21st centuries when he was elected to that post in 2007 and served from 2008 to 2013.

Lovick was born on May 9, 1951 in Shreveport, Louisiana to Mrs. Dorothy Lovick. He graduated from Allen High School in Shreveport and then studied for one year at Northwestern State College in Natchitoches, Louisiana. At the age of 19, Lovick joined the U.S. Coast Guard, traveling to Alameda, California in the San Francisco Bay Area for boot camp. The company commander immediately selected him as assistant recruit commander and in 1970 Lovick arrived in Seattle stationed aboard the Coast Guard icebreaker Northwind.

In 1971, John Lovick attended the Coast Guard quartermaster and signalman schools in Newport, Rhode Island. On his first day, a supervisor selected him to serve as class president. Lovick returned to Seattle to serve aboard the Coast Guard Cutter Wachusetts, a weather vessel. In 1972, while in the Coast Guard, John Lovick married Debbie Miller.  The coupled had three children and remained married for 17 years.

Lovick continued to serve in the Coast Guard in the Seattle area.  He was stationed on Seattle’s Pier 91 from 1972 to 1974 where he conducted oil pollution investigations.  Lovick retired from the Coast Guard in 1971 as a petty officer second class.  On April 1, 1974, Lovick joined the Washington State Patrol. Four years later he joined the Coast Guard Reserves, serving until 1983.  In 1980 John Lovick graduated from Shoreline Community College with an Associate Arts degree in Criminal Justice.

John Lovick married Karen Alyesworth in 1992 and moved from Bothell, Washington, a Seattle suburb. As Lovick and Alyesworth had both been previously married and had children from those unions, they blended their families.

In 1993, John Lovick entered politics. He was elected to the Mill Creek City Council and served for five years while still a member of the Washington State Patrol. In 1997, Lovick was promoted to State Patrol sergeant and in the same period elected to the Washington State House of Representative as a Democrat. Reelected four times, he represented 44th District, essentially the Bothell area, until January 2007.

While in the state legislature Representative Lovick focused much of his attention on public safety issues. In 2002 he sponsored the primary seat belt law for the State of Washington. In 2007, Lovick sponsored the auto theft bill which required stiffer penalties for car theft.

Lovick retired from Washington State Patrol, after nearly 31 years, in December 2004.  In 2006 he decided not to run for reelection. His career in public service took a new turn when in November 2007, Lovick was elected as Snohomish County sheriff. On January 1, 2008, John Lovick, took the oath and became the first African American county sheriff in the history of Washington State.

On June 3, 2013, John Lovick was appointed Snohomish County Executive, becoming the highest ranking African American official in that county and the first Black person to hold that post in the history of the county. In 2015, after losing his reelection bid to Dave Somers, Lovick stepped away from politics until he was appointed on June 8, 2016 to fill the unexpired term of Hans Dunshee who resigned from the 44th District legislative seat. Lovick was elected to a full term in November 2016.