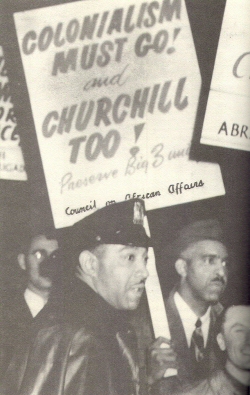 The Council on African Affairs (CAA) was founded in 1942 and quickly emerged as the leading voice of anti-colonialism and Pan-Africanism in the United States and abroad before becoming a casualty of Cold War liberalism and anti-communism in the early 1950s. Paul Robeson served as the CAA’s chairman for most of its existence while W.E.B. Du Bois served as vice-chair and head of the Africa Aid Committee. Alphaeus Hunton, Jr. was the group’s executive director, editor of its publication, New Africa, and the motive force behind much of its activity and vision. Despite its radical politics, in the early and mid 1940s the Council on African Affairs benefited from the support of a range of liberal activists and intellectuals, including E. Franklin Frazier, Mary McLeod Bethune, and Rayford Logan, indicating the widespread appeal of its program and message.

The Council on African Affairs articulated and promoted a fundamental linkage between the struggle of African Americans and the fate of colonized peoples in Africa, Asia and elsewhere in the world. Among a host of other campaigns, it lobbied the federal government and the United Nations and lent material support on behalf of Indian independence, striking trade unionists in Nigeria, and African famine relief, all while publicizing the connections between these campaigns and its larger critique of colonialism and capitalism. The CAA’s most significant work involved South Africa, where it supported striking miners and helped direct worldwide attention to the African National Congress’s struggle against the Union of South Africa government and its implementation of racial apartheid.

The Council on African Affairs advocated an internationalization of domestic civil rights, support for African liberation groups, and a non-aligned stance on the part of developing nations toward the Cold War superpowers. Combined with many CAA leaders’ past and current associations with the Communist Party, this position had become politically untenable by the early 1950s. Liberal supporters abandoned the CAA and the federal government cracked down on its operations. In 1953 the CAA was charged with subversion under the McCarran Act. Its principle leaders, including Robeson, Du Bois, and Hunton, were subjected to harassment, indictments, and in the case of Hunton, imprisonment. Under the weight of internal disputes, government repression, and financial hardships, the Council on African Affairs disbanded in 1955.