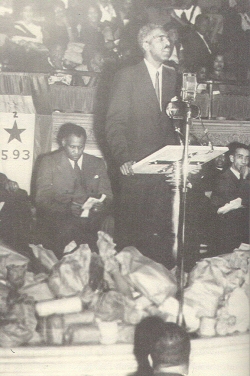 A leading intellectual and activist of the post-WWII period, Alphaeus Hunton Jr. was the executive director of the Council on African Affairs (CAA) and editor of the CAA’s publication, New Africa, from 1943 through the organization’s dissolution in 1955. In this capacity, Hunton did more than perhaps any other individual to articulate an anticolonial critique of post-war liberalism and racial capitalism and to advance a vision of Pan-African black identity that stressed the inextricable linkage between African Americans, Africans, and colonized peoples around the world.

Hunton was born in Atlanta in 1903. His family migrated to Brooklyn in the wake of the Atlanta race riot of 1906. He graduated from Howard University in 1924, earned a master’s degree in Victorian literature from Harvard in 1925, and studied for a doctorate at New York University from 1934-1938. Hunton’s political voice began to emerge during his years at New York University. Attracted to Marxism-Leninism, he was involved in union organizing, joined the Communist Party, and served on the executive board of the National Negro Congress in 1936.

In 1943 Alphaeus Hunton joined the CAA as its educational director. In short order he transformed the CAA from an educational outreach group with limited reach into a political action organization with widespread influence. Lobbying through the federal government, the United Nations, and the burgeoning black press, Hunton spearheaded CAA campaigns on behalf of striking Nigerian trade unionists, famine relief in West and South Africa, and the African National Congress (ANC) which had initiated its nearly century-long struggle against apartheid in South Africa.

A combination of government repression and financial difficulties doomed the CAA, and with it, Hunton’s influence as an activist and intellectual. The CAA was prosecuted under the McCarran Internal Security Act of 1950, and in 1951 Hunton was imprisoned for six months for contempt of court. The CAA formally disbanded in 1955. Hunton published Decision in Africa: Sources of the Current Conflict in 1957 but was unable to find work commensurate with his education and experience. In 1960 he moved to Guinea and shortly thereafter joined W.E.B. Du Bois in Ghana. In 1966 he relocated to Zambia where he spent his final years as a correspondent for the ANC publication Mayibuye.