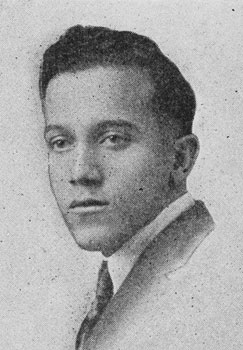 John Seamon Cotter, Jr., a talented playwright, journalist, and poet, was born and reared in Louisville, Kentucky. The son of journalist, playwright, poet, teacher and community developer Joseph Seamon Cotter, Sr., the younger Cotter’s education began with his sister Florence Olivia teaching him to read. Cotter graduated from Louisville’s Central High School in 1911, where his father was the school principal and his teacher. His mother, Maria F. Cox, was also a teacher at the school. Cotter attended Fisk University in Nashville, Tennessee for two years before being stricken with tuberculosis, a disease that earlier claimed the life of his sister Florence in 1914.

Joseph Cotter, Jr., completed a collection of one-act plays and poetry during the last seven years of his life. He also wrote one play, On the Fields of France, a protest play in one act which was published in 1920 after his death.  It followed the last hours of two American army officers, one black, one white, both mortally wounded, who ultimately died hand in hand on a battlefield in northern France wondering why they could not have lived in peace and friendship in the United States.  Cotter wrote two other plays, The White Folks’ Nigger and Caroling Dusk which were never published.  Cotter died of tuberculosis in Louisville in 1919 at the age of 24.