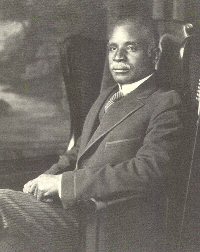 Kelly Miller, mathematician, intellectual, and political activist, was born on July 18, 1863 in Winnsboro, South Carolina to Kelly and Elizabeth Miller. Like many African Americans who took advantage of increased educational opportunities after the civil war, Miller attended Howard University in Washington, D.C. He earned a B.A. in 1886. While at Howard he served as a clerk in the US Pensions Office.

In 1887 Miller became the first graduate student at Johns Hopkins University where he studied mathematics and physics. An increase in tuition forced Miller to leave Johns Hopkins in 1889 without completing his graduate work. He continued his studies as a student of Captain Edgar Frisby, an English mathematician at the US Naval Observatory and briefly taught mathematics at M Street High School in Washington before being hired by Howard University as a professor of mathematics. Miller taught mathematics at Howard for the next five years. He also enrolled in Howard University for graduate study, earning an  M.A. in 1901 and an LL.B from Howard University Law School in 1903. In 1894, Miller married Annie May Butler and the couple had five children named Newton, Paul, Irene, May, and Kelly Jr. Three years later, in 1897, he helped found the first organization for black intellectuals known as the American Negro Academy.

Like other turn of the twentieth century black intellectuals, Miller believed that the developing social sciences would be useful in assessing the experiences of black Americans and in charting a course for their future advancement. He helped organize Howard’s sociology department during the 1890s and served as a professor of sociology from 1895 to 1934.  Miller’s interest in the plight of African Americans encouraged him to assist W.E.B. DuBois in editing the Crisis, the magazine of the National Association for the Advancement of Colored People (NAACP) and to craft numerous lectures and pamphlets that examined the racial experiences of black Americans. His thoughts and ideas appeared in weekly columns that were published in more than 100 newspapers in the 1920s and 1930s and appeared in several books including Race Adjustment (1908), Out of the House of Bondage (1914), and The Everlasting Stain (1924).

In addition to his duties as an educator and researcher, Miller served as dean of the College of Arts and Sciences at Howard from 1907 to 1918. After spending over fifty years at Howard University as a student, teacher, and administrator, Miller retired from Howard in 1931. He died in Washington, D.C. on December 29, 1939 at the age of 76.