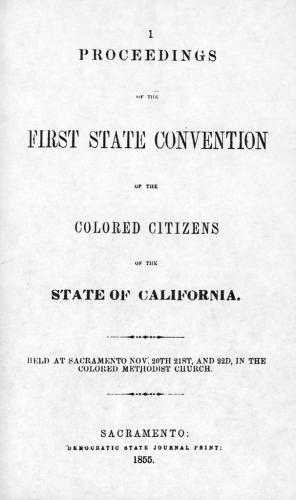 The four California Colored Conventions held between 1855 and 1865 were a response to blacks being treated as second-class citizens and constantly threatened and violently assaulted by white men without legal and political recourse in Gold Rush era California. The first convention in 1855 marked the beginning of organized civil rights activism in the American West.

The Conventions were comprised of individuals and a number of organizations including churches, literary societies, and social clubs from across California. The conventions were also the continuation on the west coast of the national Negro Convention Movement which began in the Northeastern United States in 1817. Those eastern conventions opposed the free black colonization back to Africa, racial discrimination, and slavery.  In California, most convention leaders, including Mifflin Wistar Gibbs, Peter Lester, and Jeremiah B. Sanderson, had been Northern abolitionists and church leaders, and had traveled in Colored Convention circles prior to migrating to the West.  They applied their experience to a new set of issues.  Their goals were to end the testimony ban in court cases in the state, abolish slavery locally and nationally, and to gain (male) voting rights and access to public education and public accommodations.

The first convention, which met at the St. Andrews AME Church in Sacramento in November 1855, included forty-nine delegates representing ten of California’s twenty-seven counties.  The convention created an Executive Committee to run its daily affairs and to craft broad civil rights strategy.  Subsequent conventions in Sacramento in 1856, San Francisco in 1857, and Sacramento in 1865 all followed that pattern.  These Executive Committees were critical in enabling black Californians to confront the political challenges they faced in the Golden State during the 1850s and 1860s. The 1865 Committee also capitalized on the changing social and political climate of Civil War California when the new Republican-dominated legislature led by Governor Leland Stanford repealed California’s testimony ban in 1863.

The last Convention, which took place in 1865, brought to an end the period of statewide activism during the Gold Rush era.  Its legacy was to lay the foundations for new activism that emerged later in the 19th Century and that continues into the 21st Century.

Ruffin II, H. (2009, February 04). The Conventions of Colored Citizens of the State of California (1855-1865). BlackPast.org. https://www.blackpast.org/african-american-history/conventions-colored-citizens-state-california-1855-1865/