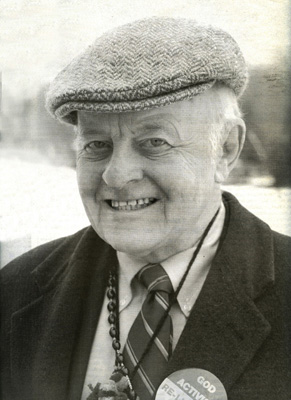 Edward T. “Ned” Coll is a civil rights activist and one time (1972) presidential candidate from Connecticut known for taking on the privatized and segregated beaches along the Connecticut coast in the 1970s. Born in 1940, he grew up in Hartford, Connecticut and was educated at the Jesuit Fairfield University, graduating in 1962. Ned Coll, who is Catholic, is deeply in touch with his faith and claims that it is one of the primary motivators for his activist campaigns, both the social and spiritual.

Ned Coll is most recognized for his beach-access activism in the 1970s. During this time, the majority of the Connecticut coastline was private and that privatization made it almost impossible for people of color and people from lower economic classes to access the beach. Essentially the coastline developed into a collection of “privatized public spaces” akin to the style of a gated community.

Coll chose to begin his activist campaign to desegregate beaches in August 1975 when he attempted to take a class of inner-city students from Hartford to the coast for a day at the beach. The group was not well received primarily because most of the students were African American. Realizing the problem, Coll began organizing busloads of students who usually came to the beaches unexpected. This style of activism initially had mixed results on the Connecticut residents who lived along the state’s beaches.  While many were sympathetic to the protests designed to make the beaches accessible to all, other residents resented the intrusion of these newcomers whose very presence was a challenge to their control over beach space.

Three years before Coll began the beach protests, he had a brief stint as a presidential candidate, running in the 1972 Democratic Primary. Coll did not see much success as a candidate however gaining only 0.01% of the vote in the early primaries and soon dropped out of the race.  Coll chose not to pursue government office after his loss in the presidential primaries but he did continue his activism including his fight to get more African American men into the Catholic priesthood and promoting what was often considered a conservative issue, the reinstatement of prayer in public school.

While Coll is best remembered for his 1970s efforts to desegregate beaches on the Connecticut coast, the official integration came only in 2001 after Brenden Laydon, another Connecticut resident, filed a successful lawsuit which repealed various ordinances in coastal communities limiting beach access.

Ned Coll is married and has two children, Beth and John Coll.