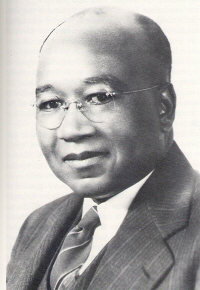 Reverend J(esse) J(ames) Clow was a beloved minister and a prominent figure in the struggle for civil rights in Portland, Oregon.  In 1936, Rev. Clow began a service of ministry at Portland’s Mt. Olivet Baptist Church.  Mt. Olivet was the first African American Baptist Church in the state of Oregon and during the 1940s and 1950s was also the largest black church in the state.  It was from this vantage point that Clow lived and preached a social gospel that contributed to the civil rights battles of Portland’s WWII challenges and continued through the turbulent sixties.

Clow was born in Hufsmith, Texas, one of 15 children, and was named Jesse James Clow, although he preferred the initials “J. J.”  Clow finished high school at Tuskegee Institute and received his B.A. from Virginia Union University.  His first pulpit was in Virginia, a second in Georgia, before arriving in Portland.  His “southern exposure” helped prepare him for a lifetime of activism for justice and civil rights.

During the World War II years, Clow served as president of the local chapter of the NAACP.  He was also deeply involved in the establishment of a Portland office of the Urban League.  Along with these national organizations, Clow and other Portland area black leaders worked tirelessly to improve housing and employment opportunities for African Americans.  These efforts were largely responsible for ridding the city of many traditional economic and social segregation policies.

Following World War II, Clow helped encourage African Americans to switch from the Republican to the Democratic Party, and to register new voters to implement important political change in Oregon.  This persistence was rewarded in 1953, when the legislature of Oregon finally passed the state’s first civil rights ordinance.

Upon his retirement from Mt. Olivet in 1963, Rev. Clow spoke warmly of the progress he had witnessed during his lifetime.  He continued to believe that Christianity must be interpreted in terms of how men behave towards one another and not just to comfort them.  Until his death, Clow encouraged the community of Portland to more fully embrace democratic ideals in its social, political, and economic sectors.