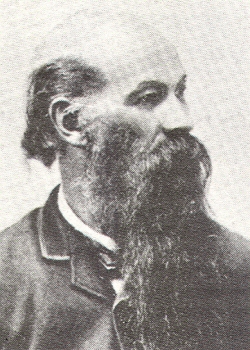 The daguerreotypist James Presley (J.P.) Ball was born in 1825 in Virginia, probably a freeman.  As a young man he learned daguerreotyping and opened his first studio in Cincinnati, Ohio at age twenty.  The city was a center for anti-slavery activity as well as the photographic arts, and Ball became a leader in both.  He wrote and published a pamphlet depicting the horrors of slavery to accompany a large panorama in his gallery, and served as the official photographer for a celebration of the 25th anniversary of the Emancipation Proclamation.  By the 1850s, his business had achieved tremendous success.  Frederick Douglass, Jenny Lind, and the orator Henry H. Garnet, among other notables, sought out his services, and he became quite affluent.

Ball was a lifelong entrepreneur.  After more than three decades in Cincinnati, he moved to Minneapolis, Minnesota and ran a studio there; and in about 1887, went to Montana with son James Presley, Jr.   Now well into his sixties, he opened another busy daguerreotyping studio in Helena.  Among other projects, he photographed the building of the state capitol.  Ball was elected a delegate to the Republican convention in Montana territory in 1894, and nominated to run for county coroner (he declined this nomination, citing the demands of his business).  Ball’s son edited a newspaper, The Colored Citizen, which is a very valuable source on African Americans in territorial Montana.

The information about J.P. Ball’s personal life is sketchy.  Besides James Presley, Jr., he had at least one other child, Estella Ball.  In 1887 he married a schoolteacher named Annie Ewing, who was probably his second wife.  It appears that he moved to Seattle, Washington in about 1900 and, now in his seventies and suffering from rheumatism, opened his last studio called Globe Photo.  Records show he moved to Hawaii for his health within a few years, and died there in 1904 at the age of 79.