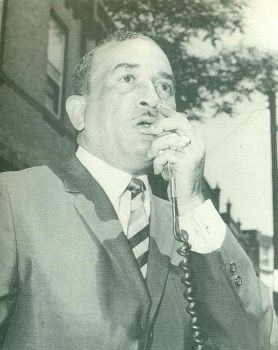 Cecil Bassett Moore was a lawyer, civil rights activist and leader of the Philadelphia National Association for the Advancement of Colored People (NAACP) from 1963 to 1967. A charismatic politician, Moore was able to mobilize large numbers of working class African Americans into direct political action. He combined a commitment to institutional desegregation common to the NAACP with a black nationalist belief in self-sufficiency that was at odds with the usual practices of the organization. His willingness to confront other civil rights groups over what he felt was an over-representation of the black middle class cemented his populist appeal.

In the 1950s, Moore was recruited by the Baptist Minister Leon Sullivan to run the law enforcement committee of Sullivan’s Citizens Committee Against Juvenile Delinquency.  By the early 1960s he had become the organization’s president. His political rise continued in 1963, when he was elected president of the local NAACP, thanks to a campaign-style turnout operation that secured him 296 votes, 124 more than the runner-up.

From the start of his presidency, Moore began opposing local liberal advocates and challenging the standard NAACP practice of collaborating with them. Moore deployed the protest strategies developed by civil rights activists in the South, but rejected the non-violent philosophy of Martin Luther King. His efforts to increase black hiring in the Philadelphia construction industry were characterized by confrontational language and picket lines, but they successfully exposed the failure of the city’s liberal leadership to turn civil rights legislation into real gains in equality for African Americans.

Moore reacted quickly to the 1964 riots in Philadelphia, moving about the community to help calm tensions. He used this as evidence of his political power, comparing himself to a machine boss, and critiquing middle-class “part time Negroes.” He was re-elected to the local NAACP presidency in 1965 on a promise to integrate Girard College, an all-white, private boys school in an overwhelmingly black neighborhood. The picketing of the school lasted for eight months during 1965, and included a visit from Martin Luther King. Moore criticized King’s “imported Gandhi philosophy of non-violence.” Nonetheless Moore met with King during the visit, and the two spoke together to a large crowd outside Girard. However, the school was not desegregated until a 1968 U.S. Supreme Court ordered the integration of the school.

In 1967, the NAACP national headquarters split the Philadelphia branch into five smaller organizations in an attempt to dilute Moore’s power. He resigned soon after, and ran for mayor that same year. He secured just 9,018 of the 700,000 votes cast, and came in third behind Republican Arlen Specter and the Democratic victor, James Tate. A later run for the 5th District City Council seat was successful, and Moore served from 1974 until his death on February 13, 1979.  In 1987, the city of Philadelphia honored Moore by re-naming Columbia Avenue in North Philadelphia, Cecil B. Moore Avenue.