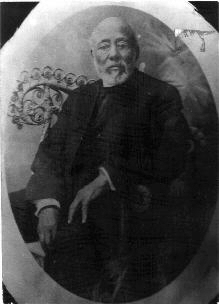 Peter William Cassey was born in Philadelphia in 1831, the son of renowned African American abolitionist Joseph Cassey.  Cassey learned political activism from his father. He also learned the barbering trade which he pursued after his arrival in San Francisco in 1863.  In 1859 Cassey and partner Charles H. Mercier were listed in a San Francisco Directory as partners in a shaving saloon in the basement of the Union Hotel.

Sometime in 1860 Cassey relocated to San Jose.  He joined Trinity Episcopal Church and in 1866 he became an Episcopalian minister. Two years later he founded St. Philips Mission for black Episcopalians in San Jose.

The Institute received statewide support from African Americans.  The 1865 statewide Colored Convention meeting in Sacramento, for example, passed a resolution to tax each African American in the state one dollar per year to support the Institute.  The Episcopal Diocese of California provided funds through 1865.  The San Jose School Board provided additional support from 1865 through 1874 through an agreement with the Institute to matriculate all black students who applied for admission to the regular public school system.  Students were also charged tuition and board which ranged from $16 to $20 a month.

Female and male African American students from throughout California and as far away as Portland, Oregon attended the Institute which was noted for its promotion of classical education at a time when most African Americans were denied any education or given limited vocational training.  Some students, for example, were taught to read music and play instruments for $6 a month.  The Institute, however, struggled financially throughout its existence.  Averaging only 22 students a year in the day and night school, Rev. Cassey and his wife Anna, who both taught at the Institute, contributed nearly $3,000 over a fifteen year period to maintain its existence.  The Institute’s fortunes further declined in the mid-1870s when California school districts established segregated public schools for black students or opened previously all-white schools to black children.