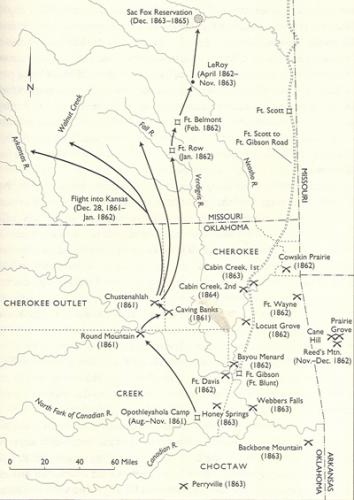 After a faction of the Creek tribe had negotiated and signed a treaty with the Confederacy in July 1861, a group of Upper Creek chiefs led by Opothleyohola repudiated the treaty and declared their neutrality.  Opothleyohola’s followers and their families gathered together on Opothleyohola’s plantation/ranch on the Deep Fork of the Canadian River and other locations in the western Creek country in August 1861. They included about 5,000 Creeks, 2,500 Seminoles, Cherokees, and other Indians, and approximately 500 slaves and free blacks, mostly from the Creek and Seminole nations. Opothleyohola had sent messages into the slave communities saying that if they joined him, they would be considered “free.”  There were attempted negotiations between Opothleyohola’s party and the Confederate Indians but ultimately the Confederates decided to attack Opothleyohola’s camp because of the number of slaves seeking protection there. Anticipating an attack, Opothleyohola and his followers broke camp on November 5 and headed northwest. The Confederate pursuit caught up with Opothleyohola’s party at Round Mountain on November 19, just south of the Red Fork of the Cimarron River. The Loyal party drove the Confederates off in a successful ambush at Round Mountain and then slipped across the Arkansas River into the Cherokee country.

In a second battle, at Chusto Talasah (Caving Banks), on December 19, once again the Confederates were driven off.  In the third battle, at Chustenahlah (High Shoals) fought above Hominy Creek just northeast of present-day Tulsa, on December 26, the Loyal party was overwhelmed and scattered.  The survivors fled to safety in Kansas through a freezing winter storm, many dying of exposure along the way. The refugees were eventually settled in camps outside Leroy, Kansas during the spring of 1862. There were probably around 150-200 armed African Creeks and African Seminoles on the exodus who fought in the three battles, making them the first black community in the United States to organize armed resistance against the Confederacy. These same men would later join the First Indian Home Guard and First and Second Kansas Colored Regiments and continue the fight for freedom on the battlefields of the Indian Territory, Missouri and Arkansas for the duration of the Civil War.