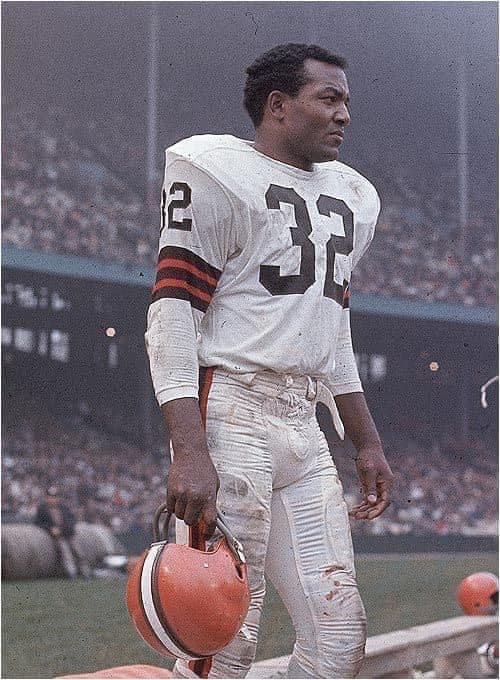 Brown attended Syracuse University in New York where he played football, basketball, ran track, and played lacrosse. As a senior in 1956-7, Brown was a unanimous All-American in football and a second-team All-American in lacrosse, and remains the only athlete to be inducted into the NCAA Hall of Fame for both sports, as well as the NFL Hall of Fame.

The Cleveland Browns selected Jim Brown as their number one pick in the 1957 NFL draft, and the rookie would capture the league rushing title, Rookie of the Year honors, as well as earn the league Most Valuable Player award. Over the next eight years, Brown would lead the league in rushing seven more times, be elected to every Pro Bowl, and win another Most Valuable Player award in 1965.  Some of his most notable records include career rushing yards (12,312) and average gain per attempt (5.2 yards). In nine seasons as a premier fullback, he never missed a game.

In the off-season of 1965, Jim Brown announced his retirement abruptly from a movie set in London, saying he would prefer to focus more on his film career, as well as working with community organizations. In 1988, Brown founded the Amer-I-Can Program, and subsequently the Amer-I-Can Foundation, which supports troubled youths and inmates through courses teaching life management and self-determination.