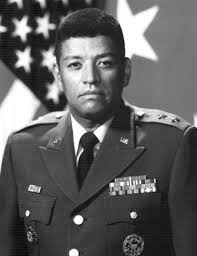 Leo A. Brooks Sr. is a retired major general formerly in the United States Army. Brooks was born August 9, 1932 in Alexandria, Virginia to the Reverend Houston G. Brooks and Evelyn Lemon Brooks. His grandparents were of mixed African American and American Indian ancestry.

Beginning in 1950 Brooks attended Virginia State University where he was a member of the Reserve Officers Training Corps (ROTC). Upon his graduation from Virginia State in 1954 with a Bachelor of Science degree, he was also commissioned as a second lieutenant in the U.S. Army Quartermaster Corps.

After receiving his commission, Brooks was attached to the 2nd Infantry Division then stationed in Alaska. Brooks’ first assignment was as a platoon leader.  When that assignment ended he rejoined the Quartermaster Branch where he commanded two companies.  Brooks served two tours of duty during the Vietnam War.  In his first tour he was an advisor to the Army of the Republic of Vietnam. During the second tour he was battalion commander stationed near Qui Nhon, South Vietnam.

Brooks quickly rise in the ranks of the peacetime post-Vietnam War U.S. Army. He was appointed Brigadier General in 1976.  In the late 1970s he was assigned as a budget liaison to the U.S. Congress for the Office of the Deputy Chief of Staff for Logistics in the Pentagon.  Brooks had other high-profile being assignments which included Deputy Secretary of the General Staff for the Army Material Command and member of J4, Office of the Joint Chiefs of Staff. He also had key-level assignments which included four commands: the Sacramento (California) Army Depot, the 13th Corps Support Command, the Army Troop Support Agency, and the Defense Personnel Support Center.  During his time in the service, Brooks also received a master degree in financial management from George Washington University.  Brooks received numerous awards while in the U.S. Army including the Distinguished Service Medal, the Defense Superior Medal, Legion of Merit, Bronze Star Medal, Meritorious Service Medal, Joint Service Commendation Medal, and Army Commendation Medal

In 1984, Brooks retired from the U.S. Army at the rank of Major General.  He then immediately accepted an appointment as the City Manager for the City of Philadelphia, Pennsylvania.  While in his first year as City Manager, Brooks advised then Mayor Wilson Goode to order the controversial 1985 raid and bombing of the headquarters of MOVE, a radical black liberation organization. After the bombing Brooks resigned from his position and feared criminal prosecution.  A Philadelphia County grand jury eventually cleared Brooks and others in the Goode administration of all criminal liability in 1988.

Brooks is married to Naomi Lewis and a father of three children.  His two sons, Vincent K. Brooks and Leo A. Brooks, Jr., have both reached the rank of General in the United States Army. His daughter Marquita K. Brooks is an attorney. Brooks’ brother Francis K. Brooks was a longtime member of the Vermont House of Representatives and served as its first African American majority leader. He was later elected to the Vermont senate.