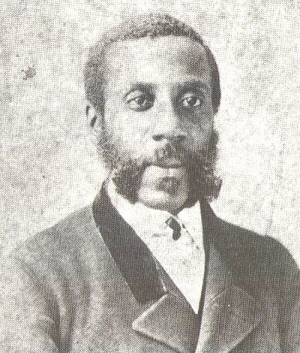 George Putnam Riley, a native of Boston, Massachusetts, was an important figure in the Pacific Northwest during the nineteenth century. Riley’s grandfather fought in the Revolutionary War under General Israel Putnam, and his middle name probably refers to his grandfather’s commander. His father, William Riley, was a clothing dealer in Boston. His mother, Elizabeth Riley, a prominent Boston abolitionist, wanted him to attend college, but he was unable to attend due to his race. While living in Boston, Riley participated in the John Brown Mass Meetings, and he worked for the prominent lawyer—and later Civil War general—Benjamin Butler.

In the 1860s, Riley moved to San Francisco, California, and later to Portland, Oregon, where he worked as a barber, and became active in business and political circles. He participated in both the California and Canadian Northwest Territory Gold Rushes. In 1869 Riley, along with 14 other Portland, Oregon residents—11 African American men, two African American women, and one white man—formed the Workingmen’s Joint Stock Association (WJSA). The members pooled funds to purchase real estate that was divided proportionately.

George P. Riley, WJSA president, was dispatched to Washington Territory to search for property. In August, the Association purchased the eastern half of the 20-acre Hanford Donation Claim in Seattle, Washington for $2,000. The tract was legally given the name, “Riley’s Addition to South Seattle.” The original purchase, in the present-day Beacon Hill neighborhood, embraces the four blocks bordered by South Forest and South Lander, between 19th and 21st Avenues South.

The origins of Tacoma, Washington’s African American community can also be traced to the arrival of George P. Riley in 1869. Riley and his associates purchased 67 acres of land in Tacoma, legally called the Alliance Addition but pejoratively labeled the “Nigger Tract.” Interestingly, none of the WJSA members, except Riley, ever actually set foot in Tacoma. However, the Alliance Addition would become the center of Tacoma’s African American community:  the Hilltop neighborhood, as it is presently known.

Riley was also deeply involved in politics. He served as the Chairman and President of the Colored Citizens of Portland, and was personally acquainted with all of the territorial governors of Washington. A well-known public speaker, his orations drew crowds of up to several hundred people. He spoke on a variety of political and historical topics. Observers called him a “natural orator, whose ability in that respect is scarcely surpassed by any of our most gifted speakers.” The Oregon Statesman opined that Riley “could have claimed high position by his ability if he had not been condemned by the prejudice against his color.”

George Putnam Riley died in Tacoma in 1905 at the age of 72.  His legacy remains significant in the Pacific Northwest. In 2005, a black real estate development group in Seattle which built homes in the city near the original “Riley’s Addition,” was named the George Riley Group after him.