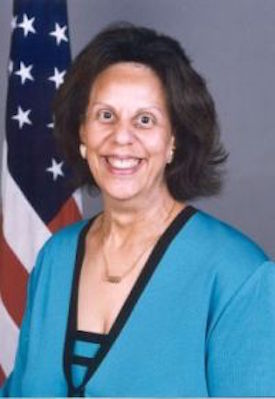 Brazeal, born in 1943 in Chicago, Illinois, earned her Bachelor’s degree at Spelman College (1965), her Master’s degree in International Affairs at Columbia University in New York (1967), and did a post-graduate study at Harvard University in Massachusetts. In 1968, her career as a U.S. diplomat began when she joined the U.S. Foreign Service.  She was first assigned as an economic officer in the Economic Bureau at the Department of State. In this capacity, she played a critical role as a member of a team of State Department officers in the U.S. who were tasked with developing ideas to help expand the free market economy and democracy in Latin America and Southeast Asia during the Cold War era.

Her first overseas appointment came when she was assigned to the U.S. Embassy in Buenos Aires, Argentina (1969-71) as a Consular and Economic Officer.  She returned to Washington, D.C. to serve in the State Department’s Economic Bureau (1971-72) and later as Economic Reports Officer for the Department of State Operations Center (1973-74).  She served in the U.S. Embassies in Uruguay and Paraguay (1974-77) and as a Trade Officer in the embassy in Tokyo, Japan from 1979 to 1982.  She returned to the State Department in 1982 and two years later became Deputy Director for Economics, serving there from 1984 to 1986. After a two year stint (1986-1987) in the Foreign Service Institute in Arlington, Virginia as a Senior Seminar member, Brazeal was back at the Tokyo Embassy from 1987 to 1990.

In 1990 Brazeal became the first U.S. Ambassador to the Federated States of Micronesia.  Serving in the immediate post-Cold War years, Ambassador Brazeal succeeded in convincing Micronesian leaders to begin developing a free market economy and U.S.-style democracy. Because of her success she was appointed U.S. Ambassador to Kenya (1993-1996).  In 1996 she became Deputy Assistant Secretary of State for East Asia and the Pacific, a position she held until 1998.  She returned to the Foreign Service Institute in 1998 where she was named Dean of Senior Seminar and the first Dean of the Leadership and Management School at the Foreign Service Institute (1998-2002). In 2002 she was named U.S. Ambassador to Ethiopia and remained in that post until 2005.