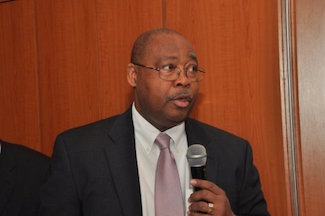 John F. Hicks is a diplomat and global educator who served as a United States Ambassador to the United Nations (UN). A native of Goldsboro, North Carolina, Hicks was born in 1949. Hicks holds a bachelor’s degree in Political Science from Morehouse College, a diploma and master’s degree from Johns Hopkins University in Bologna, Italy and Washington, D.C.

His career in international relations and diplomacy began in 1973 when he joined the United Internship Program with the United States Agency for International Development (USAID). This service propelled him through the ranks where he served in senior leadership positions in Ethiopia, Liberia, Malawi, Zambia, and the Sinai Peninsula in Egypt. In 1989, Hicks was awarded the Agency’s Senior Foreign Service Presidential Meritorious Service Award.

Hicks received his first presidential appointment in 1993 as the Assistant Administrator for USAID’s Africa Bureau. In this capacity Hicks was responsible for distributing aid in addition to strategically managing United States humanitarian and economic development programs on behalf of Sub-Saharan Africa. Towards the end of his tenure with USAID, he became a member the Senior Foreign Service and was promoted to the rank of Career Minister.

In 1996 President Bill Clinton announced Hicks’s second appointment, as Ambassador to Eritrea.  By 1997, Federal investigator Jacquelyn L. Williams-Bridgers had begun investigating Hicks on accusations of sexual misconduct. In September of 1997 Hicks resigned after a report by Williams-Bridgers concluded that he had engaged in sexual misconduct. Hicks was accused of sexual harassment against two secretaries in the U.S. Embassy in Asmara, the capital of Eritrea. The women claimed he engaged in inappropriate physical contact and created a hostile work environment for them.

Originally, Hicks denied these accusations and prepared to defend himself in the upcoming hearings.  He decided, however, to resign to spare his family embarrassment, and instead to pursue a career in the United States. During his brief term as the second U.S. Ambassador to Eritrea, he represented President Clinton and promoted United States commercial, political, and military interest.