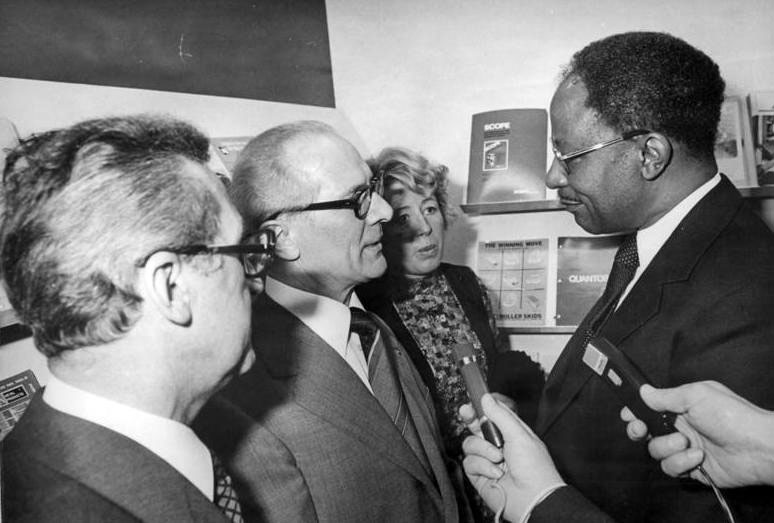 Outstanding college athlete and diplomat David Benjamin Bolen, the son of a postal worker, was born in the rural hamlet of Heflin, Louisiana on December 23, 1923. As a small child he discovered his superior running ability during an Easter egg hunt.  Homeschooled by his mother until his family moved to Grambling, Louisiana, Bolen excelled in basketball and track at Louisiana Normal High School. Soon after entering Southern University in Baton Rouge, Louisiana, a track coach convinced Bolen to concentrate on track and, after serving two years in the Army Air Force during World War II, to transfer to the University of Colorado at Boulder (CU). An outstanding sprinter in the 440-yard dash, Bolen became the university’s first athlete to qualify for the Olympics. Though he narrowly missed winning a medal in 1948 Olympics in London, UK, CU later showed its appreciation by naming an athletic scholarship in Bolen’s honor.

An exceptional student, in 1950 Bolen earned bachelor’s and master’s degrees at CU. Impressed with the work of American diplomats he had observed and with whom he interacted during his visits to Western and Eastern Europe during track and field events, following graduation Bolen immediately joined the U.S. Foreign Service. His first appointment was with the American Embassy in Monrovia, Liberia.

In his next assignment as economic officer at the American Embassy in Karachi, Pakistan, Bolen volunteered to coach the track team at the University of Karachi and advised the Pakistan Olympic Association. After a stint at the State Department as Desk Officer for Afghanistan Affairs Bolen was sent to Harvard University to study advanced economics and acquired a master’s degree in public administration in 1960. Over the next fourteen years Bolen made use of his training and experience in commercial and political matters while assigned to embassies in Ghana, West Germany, and Yugoslavia.

Nominated by President Richard M. Nixon, Bolen served concurrently as United States Ambassador to Botswana, Lesotho, and Swaziland from February 1974 until April 1976. In 1977, when Bolden was Deputy Assistant Secretary of State for Africa, President Jimmy Carter chose him as the United States Ambassador to the German Democratic Republic (then popularly known as communist East Germany).  Bolen, fluent in German, experienced three years of relative political tranquility in that nation. In 1981 he started a second career in the business world as Associate Director of International Affairs for E. I. du Pont de Nemours and Company.  From 1989 to 1994 Bolen worked as an international business consultant.

Aside from several recognitions and awards given to him by the University of Colorado, Bolen has received the Department of State Superior Service Award. An alumnus of the National War College in Washington, D.C., he has also been a trustee of University of Delaware and was Vice President of the Wilmington World Affairs Council and Director of the Wilmington Trust Company. The father of three children, in retirement he and his wife, the former Betty L. Gayden, moved to Arizona. His papers are housed at the Hoover Institution of War, Revolution, and Peace in Stanford, California.