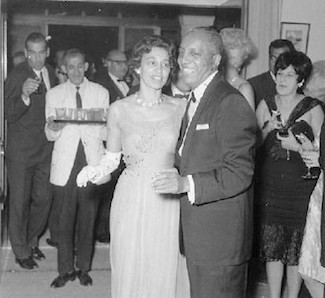 Diplomat, scholar and author Hugh Heyne Smythe was born on August 19, 1913 in Pittsburgh, Pennsylvania. His mother was a housemaid and his father, who died when Smythe was three years old, was a mailman. One of five siblings, at age six Smythe was forced to start work as a paperboy to help support his struggling family. In 1936, upon earning a degree in sociology from Virginia State College for Negroes (now Virginia State University) where he won varsity letters in basketball and track, Smythe made his first unsuccessful attempt to be employed in the U.S. Department of State.  Fortunately, his outstanding academic record allowed him to continue his studies and acquire a master’s degree in sociology at Atlanta University. In 1939 Smythe married Mabel Murphy, a student at Spelman College in Atlanta, Georgia.  He then served two years in the Army during World War II.  In 1946 he completed his doctorate in cultural anthropology at Northwestern University with the dissertation titled “Patterns of Kinship Structure in West Africa.”

When he was initially unable to obtain employment as a diplomat with the U.S. State Department in the late 1940s, Smythe taught sociology at Tennessee A&I College (now Tennessee State University in Nashville, Tennessee), and worked as a researcher for the NAACP.  From 1951 until 1953 he was a visiting professor at Yamaguchi National University in Japan. In 1953 Smythe was hired as a sociology professor at Brooklyn College in New York City, New York. Smythe and his wife assisted James H. Robinson in launching Operation Crossroads Africa in 1958, a forerunner of and inspiration for the U.S. Peace Corps.

Still longing for a diplomatic assignment, and encouraged by the more liberal presidency of John F. Kennedy, Smythe sought every opportunity to work abroad. He traveled with American delegations to international conferences, served on numerous committees and was a consultant to various agencies affiliated with the United Nations.  He also added to his résumé lectures at the U.S. Foreign Service Institute in Washington, D.C. and a Fulbright teaching professorship at Chulalongkorn University in Thailand.

Finally, on October 28, 1965, President Lyndon B. Johnson appointed Smythe the U.S. Ambassador to Syria.  He was only the tenth African American foreign ambassador and the first to be assigned to a nation in the Middle East. Despite rampant anti-American sentiment in the politically unstable, violence-stricken nation, during his 20 months as ambassador Smythe was able to demonstrate the friendly, conciliatory intentions of the United States. His good work ended abruptly when the Six-Day War began between Israel and its Arab neighbors. Smythe was immediately ordered by the Syrian government to close the U.S. Embassy and leave the nation. He deftly sidestepped the demand of political leaders in Damascus until an orderly departure of American embassy personnel could be arranged.

Six months later, on December 29, 1967, President Johnson appointed Smythe U.S. Ambassador to Malta.  After 20 months in that assignment he returned to the U.S. at the end of the Johnson Presidency and began teaching at Brooklyn College.  He also worked with the Ford Foundation, the Phelps Stokes Fund, the Congressional Black Caucus, and the State Department, which he continued to criticize for its failure to attract and hire more qualified African Americans. Among his many writings are the books An African Treasury: Articles, Essay, Stories, Poems (Crown, 1960), co-edited with Langston Hughes, and The New African Elite (Stanford University Press, 1960), co-authored with his wife, Mabel.