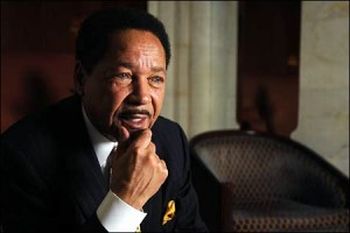 Donald Hamilton Barden was one of the nation’s most successful black businessmen and the first black owner of a major Las Vegas Casino.  He earned most of his wealth through the casino, cable television, and real estate industries.  He also started a record company, worked as a news anchor, hosted a weekly television talk show, started the weekly newspaper, the Lorain County Times, and served as the first black City Council member for the city of Lorain, Ohio from 1972 to 1975.  In 2010, Black Enterprise magazine ranked Barden Companies as the 10th highest grossing black-owned company in the United States.

Barden was born on Dec. 20, 1943 in Inkster, Michigan, a mostly black suburb of Detroit. The ninth of 13 children, he built a make-shift vegetable stand and sold the vegetables raised by his family. In high school, he quarterbacked his football team. He also excelled at basketball, and at one time captained both teams. He worked at a shipbuilding company in Ohio and quickly rose from the mailroom to executive assistant of the CEO in only two years. Later, he attended Central State University for a short time, but dropped out due to his family’s limited finances. At the age of 22, he opened a record shop named Donnie’s Records where he attracted acts such as the Jackson Five and James Brown.

With earnings he gained in Ohio real estate investment, Barden established Barden Cablevision in 1979, which developed the cable television system serving Detroit and surrounding areas. He eventually sold the company to Comcast in 1994 for more than $100 million. In 2001, he used the capital gained from the Comcast deal to establish Majestic Star Company, which included the Majestic Star, a riverboat in Gary, Indiana; Fitzgerald’s in Las Vegas; and a few other casinos in Indiana, Colorado, and Mississippi. Although the company filed for bankruptcy protection in 2009, his holdings in Fitzgerald’s were not included in the bankruptcy.

Barden was also involved in many philanthropic endeavors.  He organized a series of regional economic peace conferences to address and shed light on Detroit’s high crime rate, national reputation, and need for economic development in the city. He also socialized with many high-profile celebrities and politicians, including Michael Jackson and President Bill Clinton.

Barden passed away at the age of 67 on May 19, 2011 from lung cancer in Detroit.  He is survived by his wife, Bella Marshall, son, Don Jr., and daughter, Alana.