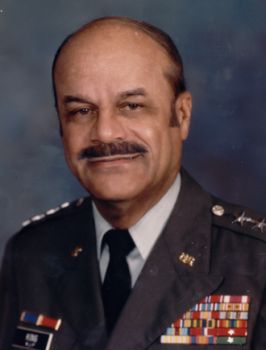 Dr. John Quill Taylor King Sr., U.S. Army general and college president, was born on September 25, 1921, in Memphis, Tennessee. King’s father, John Quill Taylor, who had graduated from Meharry Medical College, served as a medical doctor in the U.S. Army while King’s Mother, Alice Clinton Woodson, was a school teacher. King’s father passed away in 1923, and shortly after his mother married Charles B. King, who eventually persuaded the family to resettle in Austin, Texas in 1925. There King started a funeral home with the help of the family.

John King graduated from L.C. Anderson High School in Austin in 1936 and enrolled at Fisk University in Nashville, Tennessee. While there he majored in mathematics, graduating in 1941 at the age of 20. Immediately after graduation King married Marcet Hines (with whom he would have four children), and the two returned to Austin so that King could enroll in mortuary school to help his family’s business.

King’s career trajectory was suddenly altered by the onset of World War II. King was drafted in December 1941 and served in the Army for five years in the Pacific and later in the Philippines.  He became an officer in the summer of 1943 when he was promoted to second lieutenant and later captain.

Shortly after his release from active military service, King returned to the states and joined the Army Reserve remaining there for the next three decades. In 1974 he attained the rank of brigadier general in 1974. In 1985 Texas Governor Mark White promoted him to the rank of lieutenant general in the Texas State Guard.

Meanwhile in his civilian life King trained for a career in higher education. He completed a second B.S. degree in 1947 at Huston-Tillotson College and after graduation was hired by the institution as a professor in Mathematics and Business Administration. While teaching at Huston-Tillotson King earned an M.S. degree from DePaul University in 1953 and a Ph.D. from the University of Texas in 1957.

In 1960, after having taught at Huston-Tillotson College for more than a decade, King was selected as the Dean of Academics. Five years later King was named college president at the age of 44. King served as president from 1965 to 1988, holding the position longer than any other president in the college’s history. During his tenure he strengthened the school’s academic credentials and faculty, increased the college’s enrollment, and led a number of campus building and renovation projects including a new chapel and humanities building. In appreciation, Huston-Tillotson created the Marcet Alice Hines Endowed Professorship, commemorating his wife.