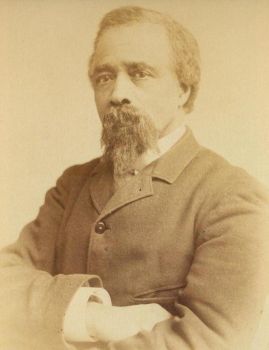 Artist Edward Bannister was a painter who concentrated on pastoral landscape scenes depicting the beauty and serenity of nature. He was the first African American artist to receive a national award.

Bannister was born in St. Andrews, New Brunswick, Canada in November of 1828. Little is known of his parents except that his father was from Barbados and his mother was of Scottish descent. Both of Bannister’s parents passed away before he was sixteen, leaving him to live in a foster home with a white family. He decided to move out and took odd jobs including working briefly as an actor and as a ship’s cook. By the 1850s Bannister settled in Boston and began working as a barber. During this time he also learned how to paint during his free time, enrolling in evening classes at the Lowell Institute.

In 1876 Bannister’s painting Under The Oaks won first prize at the Philadelphia Centennial Exposition. After finding out that Bannister was African American, the judges discussed rescinding the award. However, many of the artists he had competed against stood behind the decision to award the prize to Bannister, and he kept the first-place medal.

Winning first-place in the Centennial Exposition brought major recognition to Bannister. He was able to devote all his time to painting, and over the next decade he was commissioned to paint a number of landscapes and portraits. Bannister’s most important paintings besides Under the Oaks included The Newsboy (1869), River Scene (1883), Sabin Point, Narragansett Bay (1885) and Palmer River (1885).

On January 9, 1901, Edward Mitchell Bannister died of a heart attack while attending a prayer meeting at the Elmwood Avenue Free Baptist Church in Providence. He was 73.  In 1978, the artist was memorialized by Rhode Island College when the institution named its Bannister Art Gallery in his honor.